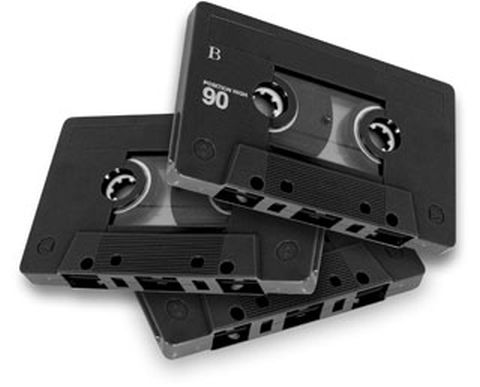 In part one of this post series, I talked about how I've digitized just about everything in my life, from DVDs to paperwork to binders to...cassettes.  I now have a much less cluttered house and a more efficient way of accessing my entertainment and information. "Cassettes?  Why would I want to digitize my cassettes?  The music on audio cassettes is terrible!" That's right, but if you're a business/success nerd like me, you likely have tons of business audio cassettes in a box somewhere that has things like audiobooks, speeches and seminars, book summaries, etc.  That's good stuff! I don't know about you, but back in the day I spent some serious money for a lot of those cassette albums, plus the information was extremely valuable. I'm not going to dump that stuff just because cassette players are no longer the norm. Why not convert all those cassettes to MP3 audio files and throw them all on a removable hard drive?  That's exactly what I did.  I digitized all the cassettes then either threw them away or sold the good ones on Ebay. Here's exactly how to digitize your old cassette collection: 1. Go through all of your old cassettes and throw out the ones that are clearly out of date.  For example, cassettes regarding fantastic stock picks for 1994 are pretty damn useless. Throw away every tape that has dated information.  When done you should have your "core" tape collection left. 2. If you don't already have one, go buy a cheap tape cassette player.  Yes, they still sell these.  They're available at any big box electronics store, or you could order one online.  Get the cheapest one you can.  Your cassettes will be audio only so sound quality really isn't an issue. I spent a grand total of $14 on mine. 3. If you don't already have one, go get a standard computer audio cable.  You want an RCA male to computer audio male cable...the standard cable that comes with most sound cards. They look like this:

4. If you don't already have it, download some freeware audio software.  My favorite is Goldwave but there's a million of them out there.  Just about any cheapy sound editing software will work.  Make sure it's relatively simple to learn and use.  Take about 20 minutes and play around with it.  You'll need to learn how to record audio from your computer "microphone" and save that audio as an MP3 file.  It should not take you long to figure out how to do that.  Ignore all the other wiz-bang features, of which they'll be many...you won't need them. 5. Using your cable, connect your tape player to your computer's microphone jack. Make sure you use the microphone jack and not the speakers jack, because they look the same. 6. Go into your sound software and play a cassette.  Make sure you can hear it on your computer's speakers. 7. Play an entire cassette side and record it into the software.   8. Save the file as a "voice quality" MP3 file.  Make sure the MP3 file you save is "voice quality", otherwise the file you save will be massive and take up way too much disk space.  Also make sure you name your files in a way that will be easily searchable later.  Remember, we're digitizing just cassettes right now, but in later posts we'll be digitizing everything else, so naming conventions are critical in assisting you to quickly search through all this stuff later. 9. Repeat with every other cassette in your collection.  What I did is just put a cassette in, played it, minimized the sound software, turned the volume of the cassette player all the way down, and worked on my own stuff while the tape was being recorded.  Thirty minutes later when the cassette player stopped, I'd pause, save the file, flip the tape over (or switch to a new tape), record, and get back to work. I had a huge tape collection, so it took me a week or three of doing this sporadically.  There's no rush with this stuff, so I took my time. When I was done, I had a perfectly searchable, instantly playable (on computer or Ipod or whatever) collection of some of my best business/success stuff.  Then I chucked several boxes full of cassette tapes.  It was awesome. Next in this series we'll talk about digitizing CDs and DVDs.