Review of the Galaxy Note 3 Smartphone 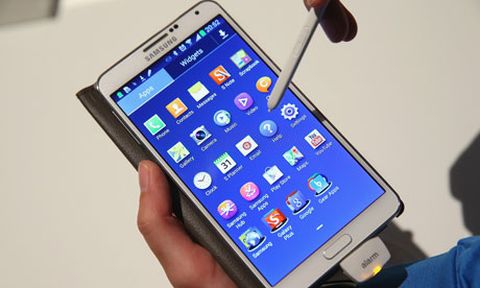 I've been using my Samsung Galaxy Note 3 smartphone for just under a year now. It's an Android phone, and, overall, I love it, despite a few drawbacks. If you're considering upgrading your phone soon, perhaps upgrading your phone to something with a bigger screen, this article is for you. The Galaxy Note 3 is, as far as I know, the biggest smartphone you can buy. They're actually calling them "phablets", half-phone, half-tablet. It is a very big phone. It's just shy of 6 inches tall and just over 3 inches wide. Here's the answer to the big question I get about it: YES, it fits in your pocket. I have many pairs of pants and I've never had a problem with it fitting into any pockets, including jacket or suit pockets. So if that was your fear, don't worry; it fits. The Good 1. Its big screen is awesome. It's very easy to read big web sites, and watching videos is pretty much as good as watching them on a small TV. The bigger screen also makes it easier to type. It even has a feature where you can launch two apps at once, side-by-side (though I never use it). 2. It's very light. I was surprised at its weight based on its size. My last phone (Droid X) was the same weight or heavier, even though it was considerably smaller. 3. The back of the phone is leather (or leather-like; not sure if it's real leather) which feels good, is easy to hold and not slip out of your hands, and doesn't slip on places like your car dashboard. With my old phone, I had to purchase a sticky rubber phone cover do the same thing. No need with the Note 3. 4. It's very fast. I'm almost a year into using this phone and it's still just as fast as when I first purchased it. My Droid X was nice, but slow as molasses in comparison. 5. It comes with a pen (stylus). Honestly I don't use it that often, but when I do, it's in circumstances where I really, really need it. This is a fantastic feature that other smartphones don't offer. 6. The battery life isn't too bad. Of course ALL smartphones have terribly short battery lives, but the Note 3's battery lasts longer than any other smartphone I've used. I also use the little-known trick of disabling mobile data (leaving only phone calls and texts working) when I'm in my home office, which easily quadruples the battery life. The Bad 1. The phone is almost impossible to use with one hand, and it's not because of the size necessarily, but because of the the placement of the side buttons. Whomever designed the button placement should be fired. It's horrible. There are buttons on both sides of the phone. That's fine. But the buttons are placed at the exact same level. This means that if you grab the phone like most humans do with one hand, and press a button on the right side of the phone, your hand will apply pressure on the left side, and you'll end up depressing both buttons simultaneously. It's stupid and I'm constantly doing this. I've had to train myself to think before pressing the side buttons, and that's bad. 2. More bad placement...the input for the phone charger is on the bottom of the phone. Um, this is insane. When the phone sits on my desk, it sits upright on a little stand. It's perfect that way. I can view it instantly while working, and have easy access to press buttons. But if I want to charge it, I have to take it off the stand and lay it down, because the charger cable can't be connected if the phone is standing up. Stupid. Yes, I know they have vertical charging accessories, but I already have a phone stand I like. Why do I have to purchase a new one just because some moron decided to put the charging jack in a stupid place? Moreover, in the car, my phone is horizontally mounted on my windshield right next to my rear-view mirror (because that's the only place it fits at near eye-level). With my old phones, I could plugin the charger cable easily this way. Not with the Note 3. The charger cable either sticks out right into my field of vision or is smashed up against the rear-view mirror. Inputs for charging cables should always be on the SIDE of a phone never the top or the bottom. It's a hassle. 3. The audio speaker is very weak. When I listen to videos, I often have to plug it into an ancillary set of speakers. This is a minor complaint though, since all of my voice communication with the phone is done via headset. (Using an arm and a hand to hold a phone up to your face doesn't make any sense, and I'm unclear why people still do this, unless they're in the middle of walking or similar.) I have a few other minor complaints, but they're really with the latest version of the Android operating system, not with the phone itself. So it wouldn't be fair to blame the phone. As you can see, the good far outweighs the bad. If you're looking for a larger, more easily viewed screen, the Galaxy Note 3 is awesome. I'm extremely pleased with it.