I Can’t Believe I Agree With Ralph Nader 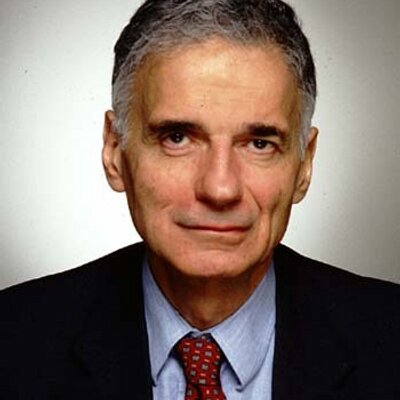 I Can’t Believe I Agree With Ralph Nader

Watch the latest video at video.foxnews.com

It's a very strange world we live in where a small-government libertarian jerkwad like me finds himself agreeing with most points made by Ralph Nader, who is as socialist as they come.

I don't agree with all of his points, but certainly with more than two-thirds of them. Here are his stances in the video with my opinions by each.

1. Raise the minimum wage - No. Way too many unintended consequences when you do this (increased prices, increased unemployment, less business growth, etc). Wage and price controls are never a good idea outside of something like wartime. Plus the stats say the vast majority of people making minimum wage are teenagers or close to it.

2. Reduce or eliminate corporate subsidies - Yes. Absolutely. The government should not be giving free money to any business, period. Capitalism means sometimes businesses fail and go out of business. It's a required function of the free market. It's sad corporatists like Obama and Bush don't understand that (or don't want to).

3. Stop the overseas wars. - Yes. Hell yes. We should end the wars (or "military actions") in Iraq, Afghanistan, Yemen, Pakistan, Libya, and everywhere else. It's ridiculous. We should not be over there blowing up innocent civilians, nor can we afford this crap. Bring the troops home right now.

4. Remove tax loopholes for corporations. - Yes, but with a proviso. The US tax code is ridiculous of course. All loopholes should be eliminated for individuals and corporations alike, and it should be replaced by either a flat income tax, flat excise tax, or a national sales tax. Nader admitted he would be for dropping the nominal corporate tax rate from 35% to 15% provided all loopholes were eliminated, and I completely agree.

5. Revise trade agreements that encourage American corporations to use third-world workers instead of American workers. - It depends. Nader wasn't clear on exactly what he proposes, though I would imagine it would involve less free trade and more protectionism and tariffs. That's a very complex issue and my opinions on this would be more than I could describe in a little blurb like this. I agree changes should be made though. China is laughing at us with what they're getting away with.

6. Break up the giant banks. - Yes, but only if you're very careful. This is perhaps one of the few less-libertarian views I have. I do believe in anti-trust laws and I do indeed think the big banks should be broken up. They never will be of course, since banks run the world. But they should be provided its done carefully and correctly.

That's 4 out of 6 points I agree with Ralph Nader on.

This article was originally published on May 10, 2014

Thrill of the Hunt Men vs. Pleasure of Sex Men »