HomePoliticsDonald Trump For President!!! (But Not Really)

Donald Trump For President!!! (But Not Really) 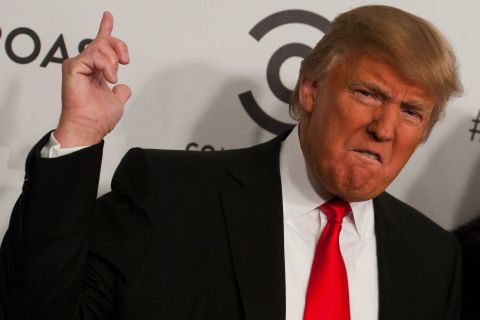 Donald Trump For President!!! (But Not Really)

My prayers have been answered. Donald Trump is running for president.

Ohhh, sweet lord Jesus, this is going to be so awesome!

I’ve got my popcorn ready...I can’t wait to watch the bloodbath.

He’s not going to win of course. I doubt he even wants to win. This is all a publicity stunt to improve his personal brand. And it will work. He’ll make mountains of money off all of this. Nationally-known presidential candidates always do. Running for president is a great business model.

Here’s why Donald Trump running for president will be the Greatest Thing Ever:

1. He’s a billionaire with his own money, so he doesn’t need to kiss anyone's ass or pander to anyone for campaign donor cash.

2. He doesn’t really want to win, so he can say literally whatever he wants with no filter whatsoever. He has nothing to lose.

3. He’s a complete and total asshole. He’ll bash everyone involved because he loves the drama.

4. He knows that the more of a jerk he is, the more attention he’ll get, which is what he wants.

5. He’s not a politician. He doesn’t have to be politically correct in any way.

He's only given one speech so far, and it was friggin' craptacular! Here’s just a small sample of it:
Play Video
Ohhhh this is going to be so good. The guy actually hired actors to watch that speech. If you actually watch the full speech, which I did with an ear-to-ear smile on my face the entire time, you can tell he didn't even practice it at all. He was just talking off the cuff and out his ass. He just doesn't give a shit. Man, this can't get any better!

I'm hoping and praying every day that he gets enough poll numbers to get into the Republican debates. He will absolutely eviscerate all those other boring corporatist bastards. God damn, that would be great. Of course Trump is a big government corporatist himself, but he's not going to win nor wants to, so he's safe. Hillary Clinton and Jeb Bush are far more of a threat to your personal freedom than Trump ever could be. That's why him running is an absolute win/win for everyone...except for the other candidates, pretty much all of whom (on both sides) really do need their asses kicked. And no one can kick ass and piss people off like The Donald.

So if any pollsters call you, tell them you're voting for Trump! (Even if you really aren't!)

Leave it to Trump to make the slow collapse more entertaining!

This article was originally published on June 22, 2015

You Were Never Taught How to Work »