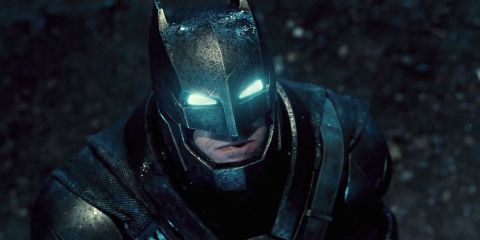 I was actually more excited about this movie than Star Wars. Was it good?

As usual, there is strong internet movie group-think where we’re all either supposed to hate a movie or think it’s great. Batman v Superman falls in-between these two extremes, which most movie critics can’t handle. It always has to be “It sucks!” or “It’s awesome!”

Thus, despite it’s many problems, I could buy into the movie and I want to see it again. I couldn’t buy into Star Wars TFA and had no desire to see it again in the movie theater. I’ll be more specific as I go along.

1. Ben Affleck’s Batman. Everyone freaked out when Affleck was announced to be the new Batman, and I did too. It seemed like a horrible choice. Then I saw Affleck in the trailers and he looked fantastic. Then I saw the movie, and he was fantastic. This is probably the best portrayal of Bruce Wayne and Batman we’ve ever seen in a movie. Every scene he was in was interesting, far better than Superman, Wonder Woman, or any of the other characters. Well done.

2. The action (though there wasn’t enough). Zach Snyder’s action scenes are always great, and this movie was no exception. The combat scenes were fun. I have one big complaint about the final battle at the end, but I’ll talk about that below. There’s very little action during the first 60% of the movie, but I was engaged enough so it didn’t matter. I still would have liked a little more action, though.

3. The starting sequence was all kinds of cool. It’s where Bruce Wayne navigates all the crashing buildings from the final battle during Man of Steel. It stirred a visceral reaction in me. Great start to a movie.

4. Cinematography and visuals. Again, this is what Zach Snyder does best. This movie looks so damn good. I wish other directors had his eye.

5. The character of Lex Luthor. No, I didn’t like Jesse Eisenberg’s performance of the character; like most other people I thought it was way too twitchy and crazy. Instead I liked that Lex Luthor in this movie was actually menacing at certain points. This is the first time we’ve seen Luthor in a movie do some truly evil, horrible things. Lex Luthor is a very bad guy, and often in other media this gets lost.

In particular, there’s a scene regarding a jar of “tea” and an explosion which legitimately surprised me; I did not see it coming and I actually gasped out loud when it happened. When a movie surprises me that effectively, it’s doing something right.

6. Excalibur. This is a minor thing, but the flashback where Batman watches his parents get murdered is right after they’re walking out of the 1981 movie Excalibur. Batman in this movie looks to be my exact age, and when I was nine years old in 1981, I saw Excalibur in the movie theater with my parents too. I loved it, and it was fun for me to see this parallel.

1. The movie is way too full and tries to do way too much. This is the movie’s biggest flaw, and the problem most critics are rightly complaining about. It’s so jam-packed full of characters, setups and plotlines that it gets really messy. It should have been two separate movies.

However! In the movie’s defense, 30 minutes were cut from it. They’re going to re-integrate these 30 minutes back in the DVD / Blu-ray release and make a R-rated version. So it’s not quite fair of me to judge the entire movie until I’ve seen that version in a few months, which I will definitely get my hands on.

2. Gal Godot as Wonder Woman. Everyone is saying she did a great job; this is a classic case of fanboy bullshit. Yeah, she wasn’t bad, but she barely had any lines and was barely in the movie. The bottom line is that Gal Godot is a shitty actress. In the Fast and Furious movies she sucks too, and I like those movies. As a distant side-character, she works fine. However, next year she’ll star in her own Wonder Woman movie, and I predict that movie, and her performance in it, is going to bomb badly.

Moreover, as I’ve mentioned before, Gal Godot doesn’t look like Wonder Woman. Wonder Woman is an Amazonian. She's big, broad, muscular, curvy, with huge boobs and hips. Gal Godot is pretty, tall and dark haired, but she’s tiny, super skinny, has no hips, and has A-cups at best. She was a bad choice for this character all around.

3. Lazy screenwriting, particularly when it introduced members of the Justice League. The way these new superheroes are presented is, while not horrible, pretty lame. It’s some of the laziest screenwriting I’ve seen in a big budget, important movie like this. I won’t reveal how they do it, but it’s kinda dumb.

4. The CGI is irritating. I’m in the minority in that I usually like CGI in movies, since I go to movies for one reason: to see things I can’t see in my real life. However, by the end of this movie, I was really fucking tired of the ridiculous CGI. The Doomsday character looks like shit. It’s the same damn big CGI growling monster we’ve seen about 100 times now. The joke is that he looks just like the cave troll in Lord of the Rings, and that’s pretty accurate. Not good.

He also has this silly superpower (that he doesn’t have in the comics) where he creates these massive explosions of CGI electricity that obscure the action and the camera angles. It’s really stupid. It also ruined much of the final battle in the movie, which was something I was looking forward to.

Too many studio execs in Hollywood must think “bigger explosions!!!” are always required. They’re not.

5. Superman in this movie is depressing. Henry Cavil (a 32 year-old man with a 19 year-old girlfriend by the way) does a good job portraying Superman and he fits the role just fine. The problem is that in this movie he’s sad, depressed, and unsure about everything for pretty much the entire film.

Batman is supposed to be the depressed, brooding one. Superman is supposed to be positive, upbeat, and full of light. It’s the difference between these two characters that creates such an interesting dynamic. The comics and the animated Justice League series from the 2000s that I used to watch with my daughter captured this difference perfectly. The movies have yet to figure this out.

6. Lois Lane sucks. Again. Just like in Man of Steel, the movie has a hard time trying to keep Lois Lane relevant to the story. It needlessly has things for her to do, and it's blatantly obvious. There's a scene where she spends all this time getting rid of a kryptonite spear, only to have to run back and get again a few minutes later. Again, lazy screenwriting.

In the end, I liked the movie quite a bit. It had its problems, but unlike with the last Star Wars film, these problems didn’t screw up the entire movie for me. I actually saw it twice in the theater, something I haven't done in a long while with a movie (and something I didn't bother to do with Star Wars TFA).

Next up for DC superheroes is Suicide Squad in August. I’m really looking forward to that. Next month we have Captain America: Civil War which looks awesome as hell.

This article was originally published on April 7, 2016

« Workplace Equality? Not So Much…