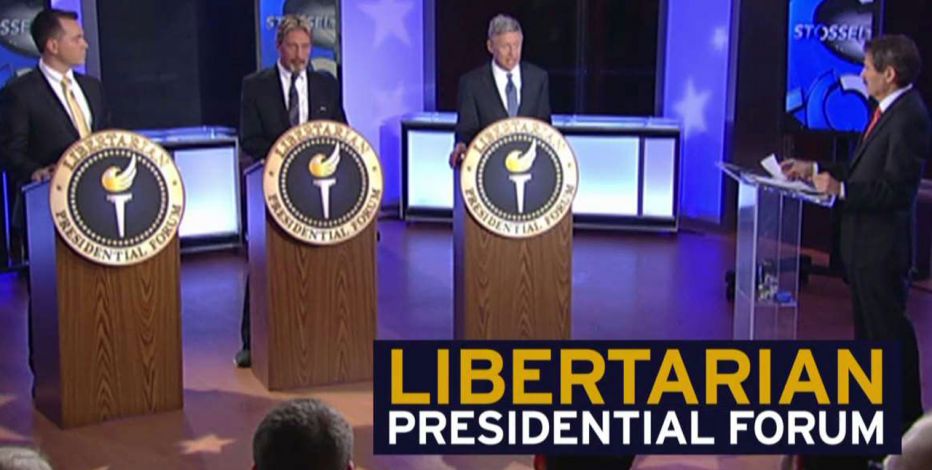 Play Video
No, none of these guys are going to get even 5% of the vote, much less win any elections, but many of you have been emailing me with basic questions about the libertarian stance. This is a good video that covers many of the basics. As an added bonus, one of the debaters is none other than my favorite crazy old Alpha Male, John McAfee! Yay! (He's the coolest man over 60 in the universe. I'm going to try to interview him soon.)

After watching this debate and comparing it to any Democrat or Republican debate, you'll see how common-sense a lot of these solutions are.

A few points that stood out to me:

- As Gary Johnson pointed out, Libertarian doesn't mean "poor people all starve." Government can still help people, provided it's people who deserve help and it's done at the local level. I already explained this here. The problem isn't about having zero welfare state, it's that the US and Europe have gone mad with welfare state to ridiculous, insane and unsustainable extremes.

- The US Department of Commerce promotes corporatism, not capitalism.

- The federal government gives every state 11 cents for every education dollar it spends. The problem is it mandates the state to spend 15 cents of requirements for this 11 cents.

- The Department of Education was established under Jimmy Carter. How has the US educational system improved in any way since Jimmy Carter?

- We have terrorism because we get too involved in other country's affairs, as I already explained here.

- McAfee points out that we're 20 years behind both China and Russia in terms of cyber-security, and there are ways to track terrorists and protect ourselves from them without violating the privacy of private citizens.

- "Foreign Aid" is not about food or medicine for starving people. It's about propping up corrupt government leaders in foreign lands.

This article was originally published on April 11, 2016