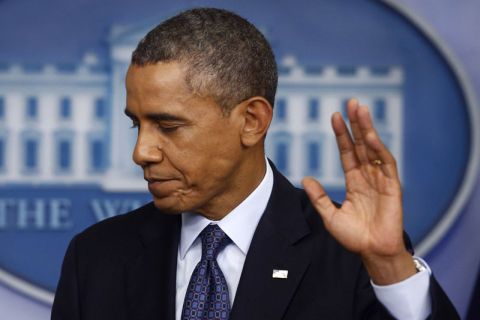 I am not a Republican and I never vote for them. I am not a conservative. I disagree with today’s conservatives on most political issues. That puts what I’m about to say in context: Barack Obama will go down in history as one of the worst US Presidents.

I didn’t say he’ll be the worst president ever. James Buchanan, George W. Bush, Woodrow Wilson, and a few others were as bad, if not worse. Obama may not even crack the bottom five, but trust me, many decades into the future when his charisma has long worn off and future historians can focus on the facts, he will be ranked as one of the worst we’ve had.

Where is this country now, after eight years of this wimpy, corporatist, establishment warmonger who successfully duped his delusional left-wing base, with a bunch of dazzling bullshit about Hopechange, into voting for him?

- The US is now at war with seven different countries. That’s right. We are, right now, bombing seven different countries(!). Isn’t that amazing? Gotta love that Hopechange. That Obama sure is a nice guy.
By the way, during the 2008 election, libertarians like Lew Rockwell (and others) warned the left-wingers that the man they were slobbering over was a militarist. They laughed at him, just like they laughed at Ross Perot (who turned out to be right about everything he warned) and Ron Paul (who will also turn out to be right about everything he warned, though that will take more time).

- The US has now become a full-bore surveillance state, far worse than under George W. Bush. Americans no longer have any real online privacy. Go watch the movies Citizen Four and Snowden and you’ll see exactly how easy it is for the US government to infiltrate and track your phone calls, texts, Facebook page, email, and various other things. Thanks Obama!

- Under Obama’s watch, ISIS was birthed, and we now have the most unstable Middle East since World War II. That Obama is a foreign policy genius!

- Obama added $7 trillion to the US debt, which is now at almost at $20 trillion(!). His administration has run a half-trillion dollar deficit pretty much every year he’s been in office.

- Under his watch, interest rates went to zero and stayed there, punishing the middle class and enriching Wall Street.

- Obama’s signature “achievement,” the corporatist scheme Obamacare, did the exact opposite of what was promised. Instead of lowering insurance premiums, it raised them. Instead of keeping your doctor or plan if you like it, you can’t. If you don’t get health insurance, you actually get fined by the IRS. He also suspended many of the mandates for the big corporations who complained, which is blatantly unconstitutional (you can't pass a law, and then after the fact, cherry-pick people or companies the law doesn't apply to).

- Under Obama, race relations in the US crashed to the worst they’ve been since the 1960s. Simply amazing.

- Real wages under Obama have been more or less stagnant throughout his entire presidency. Worse, under the first black president, blacks are now doing economically worse, with lower home ownership rates, and lower net worth as compared to whites, lower job participation rates, and lower median family incomes.[*][*]

- There has been a 42% rise in Americans using food stamps since Obama became president. 42%!!! Isn’t that amazing? And before you say it, explain to me how this is “Bush’s fault” when he hasn’t been around in eight friggin’ years.
I could go on and on. There are many more catastrophes I could talk about, but man, I am so tired of talking about this corrupt, incompetent, dingleberry that I’m thankful he’s finally leaving.

It’s bittersweet, as usual. When George W. Bush left office, as bad as that guy was, I was thinking that Obama would be either as bad or worse. I was right; he was at least as bad. Today, I can clearly see that Trump will likely be bad as or worse than Obama, and I’ll probably be right on that one too.

Again, I’m not one of these right-wingers who scream about how Obama did nothing right. Osama Bin Laden was killed on his watch, and you have to give Obama credit for that, since Bush kept talking about how "I just don't think about him anymore." Obama opened trade relations with Cuba, which is a very good thing. His supporters also say he averted a greater recession, but that's bullshit. The government didn't actually avert anything; they just pushed it into the future a few years. Nothing systemic in the corporatist banking system has been fixed since 2008. Indeed, it's worse.

Nor did Obama "ruin this country." No, that was done under George W. Bush’s watch. Obama, as I’ve said before, was simply another Bush. He was another nail in the coffin of a nation that was already unfixable when he became President in 2009. If anything, Obama has accelerated the eventual collapse of the US. Oh well. In 2017 my plans to move out of the country ramp up into the next phase. I’ll keep you all posted. Is it 2025 yet?

Want over 35 hours of how-to podcasts on how to improve your woman life and financial life? Want to be able to coach with me twice a month? Want access to hours of technique-based video and audio? The SMIC Program is a monthly podcast and coaching program where you get access to massive amounts of exclusive, members-only Alpha 2.0 content as soon as you sign up, and you can cancel whenever you want. Click here for the details.
[vc_row_inner][vc_column_inner][vc_raw_html] JTNDYSUyMHRhcmdldCUzRCUyMl9ibGFuayUyMiUyMGhyZWYlM0QlMjJodHRwcyUzQSUyRiUyRmFscGhhbWFsZTIwLmthcnRyYS5jb20lMkZwYWdlJTJGcFU1ODMlMjIlM0UlMEElM0NpbWclMjBzcmMlM0QlMjIlMjBodHRwcyUzQSUyRiUyRmNhbGViam9uZXNibG9nLmNvbSUyRndwLWNvbnRlbnQlMkZ1cGxvYWRzJTJGMjAyMCUyRjA4JTJGVFVNLTcyOFg5MC0xLnBuZyUyMCUyMiUzRSUzQyUyRmElM0UlMEE=[/vc_raw_html][/vc_column_inner][/vc_row_inner]
This article was originally published on January 2, 2017