HomePoliticsRepublicans Are for Big Government

Republicans Are for Big Government 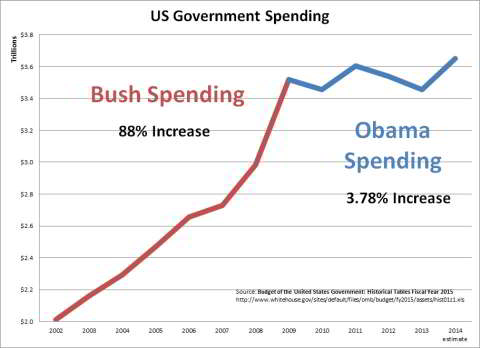 Republicans Are for Big Government

Fact 1: George W. Bush, whom Republicans worshiped back in the year 2000, who campaigned on a pledge to reduce the size of government, became the biggest big-government president in American history (outside of FDR during the Great Depression and WWII). He was the first president to introduce $2 trillion, and later $3 trillion annual federal budgets(!).

Fact 2: Federal spending grew more under Republicans George W. Bush and the lionized Ronald Reagan than under “socialist” Obama. Take a look at this:

Anyone who’s read this blog for a while knows that I utterly hated Obama as president for a myriad of reasons. It’s true that Obama was a big-government guy and spent a hell of a lot of money, increasing spending in certain years, but even he can’t hold a candle to George W. Bush whom Republicans were very enthusiastic about back in 2000, nor Ronald Reagan who, to this very day, Republicans worship as a saint.

The track record of who Republicans put into office is horrible beyond belief, even as measured by their own standards. This can only mean one of two things:

Years ago, I came to the conclusion that it’s the latter; Republicans hate small government just as much as Democrats/liberals/progressives. I used to say that we have two ideologies that rule the USA; one that hates small government, and another one that only wants small government in some hypothetical fantasy future that will never happen. “Look, when all the terrorists in the world are dead and when no one on Earth wants to do any drugs, THEN we can talk about small government, but until then, we’ve got to be realistic.”

This brings us to the Republicans’ latest choice to rule over us, Donald Trump, a dishonest authoritarian with zero emotional control who supports government health care, hates freedom of speech, and is terrified that you might find out what’s in his tax returns. Is he for small government?

To be fair, we don’t know for sure yet. As always with politicians (and with women), we have to ignore what they say or promise and only make our judgments based on what they do. Since Trump has only been president for three months, I can’t say definitively if he’s a big government guy or not. I can make some guesses but I can’t make definitive statements. Yet.

Certainly he has proposed some budget cuts and passed some executive orders that point in the small government direction and make a libertarian like me very happy. At the same time, he’s also spent a shitload of money, killed a lot of innocent civilians[*][*], and called for massive increases in other areas. (Particularly the military; Just like Obama before him, Trump is apparently going to continue the Dick Cheney Neocon Empire. That’s just great.)

When I realized Trump was going to be our next president, my guess was that he’ll be another George W. Bush. He’ll do a few things right (like cut taxes, etc) and do a shitload of things wrong. He’ll cut a little over here and massively increase spending over there, resulting in a net spending increase.

Based on his current behavior, and based on the last several Republican presidents, I still think this will happen. I could be wrong, but I think the odds of this are well in my favor.

(Of course, this assumes that Trump actually rides out his four or eight years without getting impeached or otherwise forcibly removed from office. Earlier, I considered that possibility as less than 2% and thus irrelevant. However, with more of his inner circle being outed as traitors and criminals, I’ve raised those prospects to at least 10%. This could increase with time as more corruption in the Trump administration sees the light of day. As I said before, Trump is corrupt. Just because the Lizard Queen was corrupt doesn't mean Trump isn't.)

Back on Election Day I made these four predictions, that 10 years from now:

1. The US will have even more debt, both governmental and private (unless Trump somehow defaults on the US federal debt).

2. The US federal government will be spending even more money.

3. The US economy will not be improved significantly from 2016 levels.

4. The flood of incoming third world immigrants will continue at more or less current rates, and they will continue to receive taxpayer funded government services.

The odds are overwhelming that I’m going to be right... and if you’re a Republican, you probably like big government, so you probably won’t mind.

This article was originally published on March 26, 2017

« The Fed Raises Interest Rates (and What That Means For You)

The Difference Between Kino and Sexual Escalation »