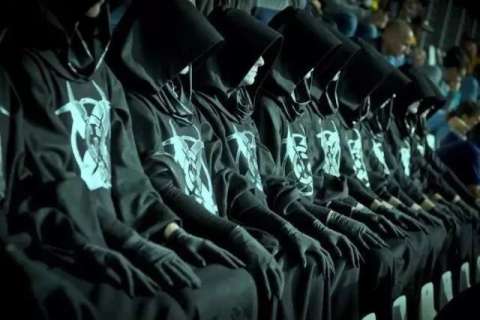 The annual Illuminati meeting started like any other. Carlos Slim was late, but he was always late, and the other members proceeded without him as they did most years. As usual, the meeting was held in a remote castle deep within the Swiss Alps. Both the cloaking device and the three-mile radius refractor field shielded the castle not only from sight, but from satellites and radar as well.

The meeting was called to order by the Chairman, David Rockefeller. More machine now than man, at 101 years old and having recently faked his own death, the whirring and clicking of his cybernetic arms could be heard as he slammed the gavel, calling the meeting to order. “Before we get on with our usual business,” Rockefeller droned with his robotic voice, “Representatives of the Former Empire would like to say a few words.” When no one spoke, Gordon Brown jabbed an elbow into the side of Tony Blair’s head, waking him from a deep sleep. “Oh, so sorry,” Blair stuttered, “Yes, well, as you can see in the balance sheets and surveys before you on page 147, immigration has become the number one problem as ranked by the rabble in the UK. If this continues to grow, we will no longer be able to keep the people from…”

“We need the destruction of Europe to slow,” Gordon Brown interrupted. He was clearly not in a good mood. “Yes, well, yes,” said Blair, “If we could just…” “Nein!” cried Angela Merkel from the opposite side of the table, “Zee destruction of Europe shall continue on schedule! I am in charge of ziss, and it shall be done!” “Of course-ah,” chimed in Mario Draghi, smiling, dressed in his usual $200,000 suit, “Do not be eh stupido.” “Yes,” Blair trembled, “Well, if you could see your way to…” “Shut up, leet-tul man,” Vladimir Putin growled through is portable translator. When Blair tried to speak again, Putin snapped his fingers, and his two power-armored guards leveled M-47 phased plasma rifles at Blair’s tiny head, a high-pitched whirring sound clearly heard within the futuristic weapons.

“The destruction and conversion of Europe shall proceed as scheduled,” Rockefeller droned, “At least until such time as the New Empire takes control from the Current Empire. The New Empire may deem to spare Europe, or some of it, but that’s a decision they will make at that time.” With that, he nodded at Xi Jinping, who, flanked by his two young and beautiful Chinese concubines, simply nodded in return. Blair nodded profusely. Brown frowned and glared at Merkel, but said nothing. “Vee vill make sure our sectors in Europe continue to profit vom our wars,” Henry Kissinger said in his thick accent, also flanked by two concubines who were a fraction of his age. His voice was so low that many would not be able to hear without the microphone at his position. “So don’t vorry, my friends, don’t vorry.”

“We may not be able to keep that up forever, though,” Condozeea Rice warned. At that, both George Bushes chuckled, so much so that the younger Bush had to quickly adjust the golden crown atop his father’s head. “Now, now, don’t worry about that,” said the Elder Bush, still chuckling, “Our three friends over there will make sure there is so much internal political fighting that we can do whatever we want, isn’t that right?” At that, George Soros and both Koch brothers nodded, smiled, and gave each other high fives. “Yeah,” said David Koch, “We’ll keep the left and the right in the USA so angry at each other that, as usual, they’ll barely pay attention to what we’re doing.”
[vc_row_inner][vc_column_inner][vc_raw_html] JTNDYSUyMHRhcmdldCUzRCUyMl9ibGFuayUyMiUyMGhyZWYlM0QlMjJodHRwcyUzQSUyRiUyRmFscGhhbWFsZTIwLmthcnRyYS5jb20lMkZwYWdlJTJGcFU1ODMlMjIlM0UlMEElM0NpbWclMjBzcmMlM0QlMjIlMjBodHRwcyUzQSUyRiUyRmNhbGViam9uZXNibG9nLmNvbSUyRndwLWNvbnRlbnQlMkZ1cGxvYWRzJTJGMjAyMCUyRjA4JTJGVFVNLTcyOFg5MC0xLnBuZyUyMCUyMiUzRSUzQyUyRmElM0UlMEE=[/vc_raw_html][/vc_column_inner][/vc_row_inner]
“Indeed,” said Soros, nodding, “They are sheep.” “And if they don’t,” issued a horrible, hissing voice from down the table, “Then we will kill them all. And eat them.” It was, of course, Hillary Clinton, the Lizard Queen herself, her mask now removed, her green, slimy skin bare for all in the room to see. As if to punctuate the point, she grabbed one of the mice from the small cage in front of her, unhinged her jaw, and popped it into her mouth. The Bill Clinton android sat next to her, powered off and lifeless, as it always was during these meetings. Having killed and eaten the real Bill Clinton over 20 years ago, the android’s resemblance to the former President was uncanny, even in its current frozen state.

“God dammit!” screeched Dick Cheney from behind is Darth Vader breathing mask, “We talked about this, Hillary. We’re not killing any large groups of first worlders unless we absolutely have to. I’m not going to tell you again, god dammit. Now go fuck yourself!” The Lizard Queen hissed and barred her teeth. Cheney slowly rose from his seat to meet the challenge, his Darth Vader-like breathing now growing heavy, and ignited his red lightsaber. “Order!” Rockefeller’s robotic voice shouted from the front of the table, “Dick, sit down! Hillary, we already voted, no mass killings of first worlders at this time.”

“What about that fucking bitcoin?” Jamie Dimon yelled. At that, almost everyone at the table groaned. “Again?” said Jay Z in amazement, “You and your fuckin’ bitcoin, man.” His wife Beyonce sat next to him, pretending not to hate him. “You guys aren’t taking this seriously!” Dimon yelled, slamming his hand on the table, “This bitcoin crap is a serious problem. We can’t just shut down the fucking internet!” “I have a few ideas about that,” said Bill Gates, smiling. “So do I,” said Jerome Powell, the group’s newest member, eager to prove himself. “You two have enough work keeping the puppet President in line,” said Alan Greenspan.

“Don’t worry,” said David Koch, “Trump’s doing a great job for us. As soon as people get comfortable with him, we’ll get someone like Bernie or Al Fraken in there, and that will really piss everyone off.” “Uh, not Al Fraken, Dave,” remindied his brother. “Oh yeah, that’s right,” David continued, “In any event, it will be a fantastic distraction. Maybe we could even get Elizabeth Warren or Kamala Harris in as our ‘first female president.’” The Lizard Queen suddenly made horrible gurgling sound from the end of the table, but said nothing.

“Or we could just yank Trump out of office and get Pence in there for a while,” said Soros, “That might be even better.” Both Koch brothers slowly nodded their agreement. On and on the meeting went, until Carlos Slim finally arrived, bringing everyone Krispy Kreme doughnuts. Kissinger and Newt Gingrich ate most of them, and the Lizard Queen scoffed when she saw there weren’t any of them that were human-flavored. Despite the arguments, it was a good meeting. They usually were.

Note to any idiots reading this: The above is satire, I don’t actually belive this, and it’s quite sad that we live in an era where I actually have to point that out. Want over 35 hours of how-to podcasts on how to improve your woman life and financial life? Want to be able to coach with me twice a month? Want access to hours of technique-based video and audio? The SMIC Program is a monthly podcast and coaching program where you get access to massive amounts of exclusive, members-only Alpha 2.0 content as soon as you sign up, and you can cancel whenever you want. Click here for the details.
[vc_row_inner][vc_column_inner][vc_raw_html] JTNDYSUyMHRhcmdldCUzRCUyMl9ibGFuayUyMiUyMGhyZWYlM0QlMjJodHRwcyUzQSUyRiUyRmFscGhhbWFsZTIwLmthcnRyYS5jb20lMkZwYWdlJTJGcFU1ODMlMjIlM0UlMEElM0NpbWclMjBzcmMlM0QlMjIlMjBodHRwcyUzQSUyRiUyRmNhbGViam9uZXNibG9nLmNvbSUyRndwLWNvbnRlbnQlMkZ1cGxvYWRzJTJGMjAyMCUyRjA4JTJGVFVNLTcyOFg5MC0xLnBuZyUyMCUyMiUzRSUzQyUyRmElM0UlMEE=[/vc_raw_html][/vc_column_inner][/vc_row_inner]
This article was originally published on February 11, 2018