The Three Types of Advice 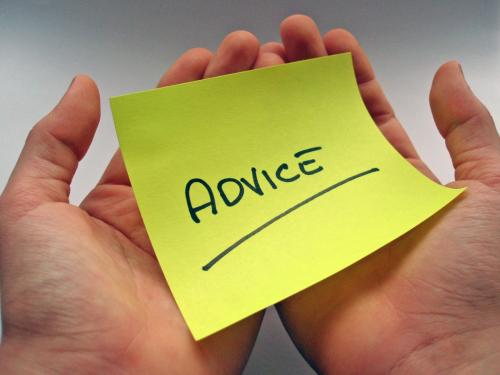 The Three Types of Advice

I've talked before about my policy of not taking financial advice from anyone who makes less or is worth less than me.  As you read that, you might think "duh".  Yet, if you think about it, you take unqualified advice from all kinds of smart-sounding but horribly unqualified people about all kinds of things, from what kinds of socks to wear to what kinds of food to eat to whether or not to take a certain job, go to a certain college, or marry a certain person.

Listen to Audio Version
Download PDF Version
Listen to Extended Audio Content
Saying that there's "bad advice" and "good advice" isn't good enough.  So often, bad advice sounds like good advice...sometimes very good advice.  Also, "bad advice" implies that the person giving the advice is trying to do you wrong.  Unless the advice giver is clearly trying to sell you something, this is never the case.  Good-sounding bad advice is usually given to you lovingly and with great care by people who care about you very much, like your parents and best friends.  That is what makes good-sounding bad advice so deadly and so hard to detect.

A better system is to place advice into three categories:

I'll illustrate.  I love both my parents very much.  They were good parents.  When I was a kid, they gave me all kinds of advice.  As I got into my teenage years and beyond, I began to notice a distinct difference in advice between my mom and dad.

My mom would often talk about how absolutely critical it was for me to go to college.  When I balked at the idea, she was horrified.  She said I would end up as a bum if I didn't go to college, and only losers didn't go to college.  When I fell "in love" (really just teenage oneitis) with a girl at my high school, my mom said it was very important for me to buy her big bouquets of beautiful flowers and write romantic notes to her about how much I loved her.  (I followed my mom's advice on that one because it sounded so right.  What do you think?  Do you think I got laid?)

My mom was, and to a degree still is, a master at giving Emotional Advice.  Emotional Advice sounds really, really good.  It makes sense.  The problem is it's completely inaccurate.  It's advice given strictly from one's emotions, not from real-world physics and dynamics.  Emotional Advice is given to validate the emotions of the advice giver, not to actually improve your condition.

Any time you hear a woman tell you that you get women by "just being yourself" or any time you hear a man tell you the "stock market is safe", you're getting Emotional Advice. My dad's stance on college surprised me.  Instead of adamantly telling me I should go to college like my mom was, he said opposite.  "If you go to college, it will be a mistake," he said.  "You're too smart, too unconventional, and you hate school.  If you go to college, you'll hate it, get bad grades, and within a year or two you'll drop out, which will be a big waste of everyone's time."

Here's the interesting thing.  As my dad spoke, I could see the sadness in his eyes.  I could tell he emotionally wanted me to go to college, just like my mom did.  But unlike my mom, he didn't let his emotions effect the advice he was giving me.  Instead of Emotional Advice, he was giving me Real World Advice, based not on his emotions, but on real world laws, consequences, and observations.

Many of you know how that story ended.  I did not go to college, choosing instead to go right into the work world and read several hundred books on money and business.  I went from peniless at age 18, barely being able to buy my own food, to making a six-figure income by age 27.  I chose to follow my dad's Real World Advice rather than my mom's Emotional Advice.  I was lucky...many young men out there base their lives on Emotional Advice from parents and friends and pay a huge price for it.

However, my dad wasn't always right with his advice.  Sometimes he was fabulously wrong.  Back when I was in my early 20's and I had just quit my job, my dad sternly advised "Stop quitting all these jobs!  If your resume has lots of different jobs on it, all of which you were at less than one or two years, no one will ever hire you."  Just like my mom's Emotional Advice, this advice sounded very right.  Because it was...in a way.  Back in the 1950's and 60's when my dad was a young man in the job market, he was absolutely right.

In the tech boom of the early 1990's when I was getting my start, his advice couldn't have been more wrong.  Before I started my own firm at age 24, I found that the only way I could increase my income was to quit and move on to a different job in a different company at least once every year or so.  I did this repeatedly as a young man (while all my buddies were still going to college, making nothing and going into debt) and by age 24 I was making the inflation equivalent of $70,000 a year.  My half-brother, who grew up in another city, did something very similar, making a lot of money at a relatively young age by constantly moving from job to job.

Then my dad said to me one day, shaking his head while looking at my income and my resume, "I have no idea how you did that." My dad had given me a third kind of advice, Outdated Advice.  His advice was very accurate years ago, but in the modern era it was dead wrong.  Whenever an older person wags their finger at you and tells you to "marry that girl!" you're getting Outdated Advice.  When that person was getting married, the divorce rate was only 9%.  Today it's 63% in most American and European cities.  Advice to get married has become Outdated Advice, as has many other things (going to college, voting for Democrats or Republicans, eating a low-fat diet, rely on your pension, etc).

Whenever someone is giving you advice about anything, stop, and think critically.  Is that person giving you Emotional Advice, Outdated Advice, or Real World Advice? Want over 35 hours of how-to podcasts on how to improve your woman life and financial life? Want to be able to coach with me twice a month? Want access to hours of technique-based video and audio? The SMIC Program is a monthly podcast and coaching program where you get access to massive amounts of exclusive, members-only Alpha 2.0 content as soon as you sign up, and you can cancel whenever you want. Click here for the details.
[vc_row_inner][vc_column_inner][vc_raw_html] JTNDYSUyMHRhcmdldCUzRCUyMl9ibGFuayUyMiUyMGhyZWYlM0QlMjJodHRwcyUzQSUyRiUyRmFscGhhbWFsZTIwLmthcnRyYS5jb20lMkZwYWdlJTJGcFU1ODMlMjIlM0UlMEElM0NpbWclMjBzcmMlM0QlMjIlMjBodHRwcyUzQSUyRiUyRmNhbGViam9uZXNibG9nLmNvbSUyRndwLWNvbnRlbnQlMkZ1cGxvYWRzJTJGMjAyMCUyRjA4JTJGVFVNLTcyOFg5MC0xLnBuZyUyMCUyMiUzRSUzQyUyRmElM0UlMEE=[/vc_raw_html][/vc_column_inner][/vc_row_inner]
This article was originally published on June 22, 2011