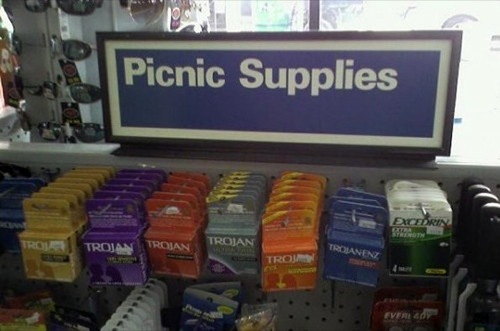 Listen to Audio Version
Download PDF Version
Listen to Extended Audio Content
Yes, you should always be prepared for any picnic.

I discuss the topic of birth control and STD prevention in-depth in my ebooks.  Today's post is concerning condoms specifically, as in different types/brands of condoms in use today.

Clearly, I shouldn't have to tell anyone reading this that you need to be using condoms consistently.  If you want to start barebacking someone you've been seeing for a quite a while (as in many months or years) and who has demonstrated trustworthy, responsible behavior in that time, then fine.  Other than that, you should be using condoms on everyone you sleep with.  Period.

It is simply amazing to me that when I talk about poly or open relationships, many people will still knee-jerk with the silly reaction "I'll get an STD!".  Obviously these people have never heard of this really cool invention called a 'condom'.  Which, by the way, people have been using since the 1800's (back when syphilis was a big problem).  I have had a lot of sex and with a lot of women for almost 20 years now, and I'm STD-free nor have I ever gotten a woman pregnant on accident, even with my high sperm count (yes I had it checked a few years ago).

There are many reasons for this, but the biggest reason is that I use condoms.  It's really not that difficult.

Don't let doctors scare you about how condoms break or slip or crack or "aren't 100% effective".  Don't let people scare you about how they "got pregnant and he was using a condom!".  Bull shit.  When he came inside her I promise that condom wasn't on his cock, I don't care what he or she says.  He was just being a dumbass or was caught up in the moment.  Bill Maher has a great comedy bit about how condoms are the "most reliable product ever invented by man", since he's been using condoms for damn near 40 years and has never had a problem with them.

Condoms can be used wrong, true.  But when used right, they work.  I have a strong theory that a lot of men actually want to impregnate the woman they're fucking even though they say they don't, which explains some of this "condoms don't work" crap.  But that's a topic for another time.

Condoms are the thing that makes sex "okay".  I have no problem whatsoever when people fuck lots of other people while condoms are being used.  I've read plenty of studies that show that in America at least, although people are exposed to sexual imagery all the time, people are actually undersexed when it comes to actually having sex regularly and often.  Problems only arise when people have a lot of sex without using condoms.

I have used many different types and brands of condoms in my day.  What follows are my anecdotal experiences and recommendations.

(standard) Trojans - Trojans suck, at least the normal kind you buy at the grocery store.  They are very thick and they do work, but you can't feel shit.  While I was married for nine years, Trojan condoms were the only form of birth control I used on her, and she never got preggo on accident.  (Only on purpose.)  One of the first women I had sex with after my divorce years ago made a grimace when I pulled out the Trojans, and said "Yeah, okay, we need to get you some better condoms."  She was right.

Durex - These guys are one notch better than Trojans, which isn't saying much.  They aren't quite as thick as Trojans, but they're in the same category.  Pass.

Sheers - These are condoms in a grey wrapper that, I think, are only available from hospitals and places like Planned Parenthood.  Sheers are probably the thinnest American-made condoms I've ever used. They're very good and I recommend them.

Lifestyles - Almost identical to Durex.  Not that great.  That includes the "nice" Lifestyles condoms like Tuxedos.

- These are awesome.  Not perfect, but very good.  They are shaped so that the end of the condom is large and baggy, but the base is very snug and tight, which is the perfect shape for a condom.  Too many times I've been having sex only to force myself and pause when I feel like the condom might be slipping.  Ecstasy condoms will slip a little, especially if you're a rough fucker like me, but not much.

In addition, the baggy tip doesn't screw up your pleasure as much as a standard condom. Trojan Ecstasy condoms are my current favorite, along with Sheers.  The only downside is the wrapper is rather large (you can be an asshole and pretend it's a Magnum), but if you fold down the corners it becomes a little more portable.

Japanese Condoms - There are many brands, but the most popular ones in the western world seem to be Kimonos

.  I get a lot of questions about these, and I have a lot of experience with them, so here's the deal.  First, they're extremely thin, way thinner than any American condom because the condom standards in Japan are less stringent than in America.  Japanese condoms are hands-down the most pleasurable condoms you'll ever wear.  I mean that.  No, it's not like "wearing nothing".  No condom is like "wearing nothing".  That's BS, but Japanese condoms do come the closest.

Regardless, there are a few major problems.  Problem number one: Japanese condoms are made for Asian-sized cocks.  That means if you're a white guy or black guy, unless you have a smaller cock, these things are very difficult to put on.

I'm no Tommy Lee by any means. I'm average in that area, but when I used these bad boys I always had trouble getting the damn things on, especially when sexual activities have already begun and things are already wet and slippery.  It's a bitch.  Once you get them on, they're tight as can be, and can be a little uncomfortable for the first few seconds (until you plunge in and start enjoying yourself).

That's not the biggest problem though.  Thin means delicate.  Delicate means breakable.  Once I started using Japanese condoms a few years back, I was jumping for joy at how great they felt.  The difficulty of putting them on was worth it to me.  So after testing a few, I hit up Amazon and bought a huge pack of about 200 of them.

A few months later, I was pumping away with an MLTR, and boom, the condom snapped mid-fuck.  I withdrew only to see a rubber hula-hoop around my completely exposed cock.  In years and years of using condoms, I had never had one break, ever.  So I assumed it was an unusual "dud" condom and didn't think much of it.  Thankfully the gal was a trusted MLTR and I was using the condom more for pregnancy protection than for STD protection.  I just pulled the thing off, replaced it, and resumed.  No harm done.

Then, about ten months later, I was fucking an FB of mine...a very hot but very, um, questionable gal who did not live a safe lifestyle.  As we were having sex I slowly started to realize that it was feeling really, really good...better than it should have while wearing a condom.  I paused, withdrew, and sure enough...the damn Japanese condom had snapped and broken again in the exact same way.

I was pissed.  This was not the kind of gal I wanted to be barebacking.  Moreover I had just gotten a full STD screening a week or two earlier.  Now I would have to go back in again.  I did so (after waiting the prerequisite amount of time) and came back clean so no harm done, but I was still very upset.  Two breaking condoms in less than a year when I had been fucking for almost 2 decades without a single problem.   I went home and threw out all of my Japanese condoms.  I will never use another Japanese condom again, and I cannot in good conscious recommend them any more.

1. This is an old one but a good one.  Place a tiny drop of lube (not too much!) on the inside tip of the condom before you put it on.  It helps with the sensation.

2. Always keep condoms on your person.  Always.  If you live the PUA or poly lifestyle, you'll never know when you might need them.  I'm serious...I've had sex in some oddball places.  I always have some in the inside pocket of my jacket, the right-side compartment in my car, and every room in my house.  Condoms are small and portable; not having a condom should never be an excuse.

4. Always, always, always pause for a few seconds a few times during sex and check your cock to make sure the condom is still on or hasn't moved up too far.  If men followed this one practice alone it would probably half the unwed pregnancy rate.  (I exaggerate, but you get the point.)  I always make a few quick checks during sex, no matter how much fun I'm having or how good it is.  I don't want an STD nor do I want to be paying child support to some bimbo fuck-buddy for the next 18 years.  Check that cock!

6. Completely ignore a woman when she says she "hates condoms" or "wants to feel you" or is "allergic to latex".  It's all horseshit.  She wants your baby and your child support check, which the legal system will ensure she'll get, even if they have to garnish your wages or throw you in jail.

Insist on using a condom or next her immediately and fuck someone else.  I'm not kidding around here.  I consider women who don't want me to use a condom on them as the biggest red flag in the dating universe.  (Of course many women generically complain about condoms because they don't feel as good; that's normal.  I'm talking about a woman who literally tells you she doesn't want you to wear one.)

This article was originally published on April 15, 2012

« Fun With Logic: The War On Women

Are You Just Continuing Your Narrative? »