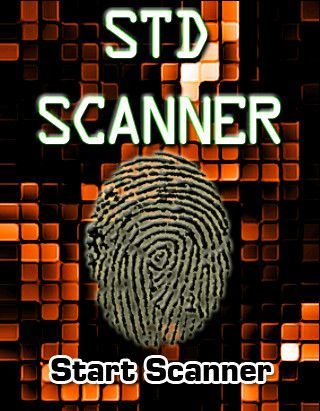 Oh yeah baby, that's great, but before we get started, if I could just take a little sample of your blood... For many years now, I have fantasized about a device someone would invent, that was about the size of my cell phone and that I could carry around in my pocket. Whenever I wanted to have sex with a new woman, I could pull out this device, have her prick herself on the arm using a small retractable needle within the device, and draw a little blood.

Then I could drop her blood onto this little device, and it would test her for all the STDs known to man. Within a minute or two, it would give me a readout, and I would instantly know if she had any STDs or not. Moreover, since it was scanning her blood anyway, the device could also notify me of any other creepy shit she might be up to, like the amount of methamphetamine she had in her system, or if she had any communicable diseases like mono or the flu.

If she was completely STD free, just to be a nice guy, I would also prick my own blood and show her that I too am 100% clean. Fair is fair. Holy mother of god. Just imagine the good it would do the world if every Alpha male had such a device in his pocket. The STD rate all around the world would plummet like a stone. What a wonderful, wonderful thing I was fantasizing about.

Lo and behold, I recently read about "Lab on a Chip" or "LOC", something researchers are now developing. Sure as shit, it's exactly what I just described; a small handheld device that can test blood and give you instant results not just on every STD, but hundreds of other possible diseases, in just minutes. Moreover, the LOC will actually be a cloud-based device, so if some new outbreak like SARS suddenly appears, it will be aware of it instantly and test for this as well.

I cannot WAIT for this thing to be developed. As soon as it's independently verified as working I'm going to be one of its earliest adopters. I don't normally do that with new gadgets but with the LOC I'll happily make an exception. It will pretty much wipe out the fear of STDs from your existence, whether you use condoms or not. (Of course you should still use condoms even with the LOC, since many of you men out there can't control yourselves and create too many babies out out of wedlock with immature women who can't afford them.)

The LOC at this point is in the development stages, and it will be several years before you and I can actually buy one that actually works at a decent price, but "several years" is a hell of a lot better than "never". You can read about the LOC here, here, and here. They're primarily being developed to control disease in the third world, which is great, but guys like you and I will be using them to avoid STDs.

Another cool thing that will happen relatively soon in our lifetimes is nonhormonal male birth control. For 50 years now, women have had a birth control pill and men have not. This is stupid, since it puts the wolf in charge of guarding the hen house. Oh, you're going to make women responsible for taking a pill every day to make sure they don't have babies? Women? Oh yeah, that's a great fuckin' idea.

While we're at it, let's make a pill men have to take every day that makes their dicks smaller. That will work just as well. I don't trust birth control pills alone for birth control and neither should you. Really, how the hell do you know for sure she took her pill this morning? You're going to trust 30% of your income for 18 years on that? I'm not.

Women have eleven or twelve forms of birth control, with abortion on top of that, while us guys have two. And what a great two they are. One is an uncomfortable piece of plastic we shove on our cocks that makes sex feel worse, and another is a very invasive and permanent surgery that involves surgical blades inside our scrotum. Oh yeah, that sounds great. Sign me up for that.

However, soon (as in a few years/decades) we'll have a male birth control pill or similar. Earlier researchers tried to make one but it screwed up men's testosterone and other hormones. Today they've chucked that route, focusing on other methods. I've read about some crazy stuff, like:

A temporary pill that simply chops off all your sperm's tails, so they can't swim anywhere. A shot developed by a guy in India that makes you infertile for ten years, with another shot that turns your fertility right back on whenever you want, without messing with your testosterone or your hormones. Sort of an "male IUD". A radio-controlled implant that instantly blocks sperm flow when you press a button. (I'll hold out for the voice-controlled version. Someday during sex I'll be screaming, "Activate CYBERCOCK!")

Like I said, crazy sci-fi stuff, but I promise you at some point, they will develop a safe method of birth control for men. It's just a matter of time. With that along with your LOC in your pocket (perhaps it will be integrated into your smartphone by then), us men will be sexually invincible, even with no condoms. That day can't come soon enough.

This is why when I say that the more technology grows, especially when inexpensive but lifelike sex robots become available, sexual power in society will slowly start to shift away from women and towards men. Right now it's men who "ask" for sex and women who "give" it. Don't be surprised in several decades to see this completely turned around. Especially when women want those pesky babies. Won't that be interesting? "What a wonderful world...

Want over 35 hours of how-to podcasts on how to improve your woman life and financial life? Want to be able to coach with me twice a month? Want access to hours of technique-based video and audio? The SMIC Program is a monthly podcast and coaching program where you get access to massive amounts of exclusive, members-only Alpha 2.0 content as soon as you sign up, and you can cancel whenever you want. Click here for the details.
[vc_row_inner][vc_column_inner][vc_raw_html] JTNDYSUyMHRhcmdldCUzRCUyMl9ibGFuayUyMiUyMGhyZWYlM0QlMjJodHRwcyUzQSUyRiUyRmFscGhhbWFsZTIwLmthcnRyYS5jb20lMkZwYWdlJTJGcFU1ODMlMjIlM0UlMEElM0NpbWclMjBzcmMlM0QlMjIlMjBodHRwcyUzQSUyRiUyRmNhbGViam9uZXNibG9nLmNvbSUyRndwLWNvbnRlbnQlMkZ1cGxvYWRzJTJGMjAyMCUyRjA4JTJGVFVNLTcyOFg5MC0xLnBuZyUyMCUyMiUzRSUzQyUyRmElM0UlMEE=[/vc_raw_html][/vc_column_inner][/vc_row_inner]
This article was originally published on January 17, 2013