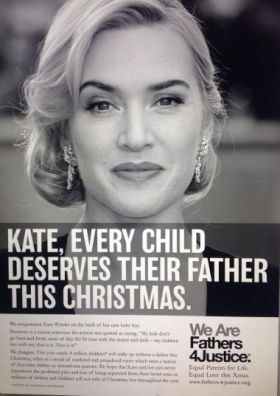 Listen to Audio Version
Download PDF Version
Listen to Extended Audio Content
A short while back, Kate Winslet made the following statement in a Vogue interview regarding her three children:

They've always been with me. They don't go from pillar to post; they're not flown here and there with nannies. That's never happened. My kids don't go back and forth; none of this 50/50 time with the mums and dads – my children live with me; that is it. That is it!

In response, a U.K. based father's rights group called Fathers4Justice put out the above advertisement against her.

As always, we need to put everything in context:

Let's start with that third point first. If you're a woman who literally has millions of dollars laying around, is it okay to crank out a bunch of babies with a bunch of guys?

Yes. It's fine. I am not worried about Kate Winslet going down to the welfare office and demanding free money from my hard-earned tax dollars. I'm also not super worried about Kate's babies growing up to be criminals on the street who will rob me at gunpoint. Instead, they'll likely grow up to be privileged, dorky rich kids, like Ned Rocknroll, who will do a lot of drugs and blow their inheritance on stupid shit. I have no problem with that.

Kate could crank out another 20 children and I still would not be worried about it in the least. She has the financial wherewithal to crank out as many babies from as many men as she likes.

The problem starts when she starts publicly bragging about this stuff, and stating or implying that other women should do this. Kate Winslet, and many other Strong Independent Hollywood Women™ I could name, often forget that most of the women they're talking to usually have no money, no jobs or low-paying jobs, and zero prospects of marrying a multimillionaire some day.

If the typical woman has three babies from three different men, or even ONE baby outside of a financially stable relationship with a financially stable and responsible guy, that woman is in for a world of pain, lasting two decades, unlike anything Kate Winslet will ever experience.

That's why when these women throw around about how they can "raise their own damn kids" and how they "don't need a man", they have no idea what kind of chaos they're causing. Yes Kate, YOU don't need a man, but 99% of the millions of women listening to you DO need a man, at least to some degree, in order to have kids while living a relatively happy life (not to mention a providing a quality upbringing for those children).

Kids Need Dads, Even If Mom Is Rich

I'm not sure why I even need to say this. Kids need dads. Even if their moms are multimillionaires, those kids still need their dads, especially if those kids are boys. (Though little girls need dads too.)

Men who grow up without fathers usually end up being the biggest beta male pussies on the planet. I work with lots of these guys, and let me tell you, these guys have a lot of problems as adults and often end up very, very unhappy.

Women who grow up without fathers become adolescents and adults who don't understand how to relate to a man in a healthy relationship, and often become either man-haters or recklessly promiscuous, having lots of babies as single mothers and continuing the evil cycle. I spend 2-4 days a week these days with my teenage daughter, because I want to make sure that when she graduates to adulthood she'll be accustomed to relating to a masculine presence in her life. I want both of my kids to be balanced adults...and this is impossible if you're just raised by your mother, even if she's the best mother in the world.

Of course if a child's biological father is a drug addict or physically abusive or hates kids, that's a different story. Keep the guy far away from the kids, and get a new positive male role model in that kid's life ASAP. But I'm reasonably sure Kate's children don't have evil monsters for fathers. Hell, one of the fathers is Sam Mendes, the guy who directed Skyfall. You're going to tell me that his kid won't be a little screwed up by rarely spending time with his father? (Especially when the temporary surrogate father is a fucking guy named Rocknroll?)

I have no problem whatsoever with Kate Winslet's lifestyle. I have a huge problem with the many women who will consciously or subconsciously be following in Kate's footsteps on a path to doom.

This article was originally published on January 16, 2014