The Definition of Relationship Problems – Drama 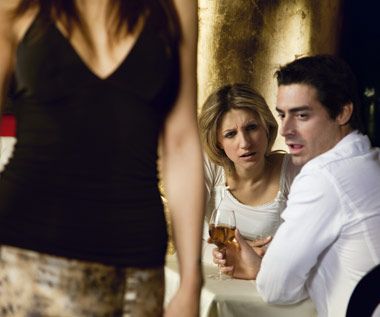 The Definition of Relationship Problems – Drama

Longtime readers know that I have a very specific definition of the term "drama" when talking about relationship problems. Per the glossary, it's this:

Drama – Any harsh negative actions directed from a woman to man where the man is the target of said negativity. Screaming, nagging, complaining, arguing, demands, crying “at you”, threats, ultimatums, the “silent treatment”, refusing sex because of non-medical reasons, all of these things are drama, and there are many others. Drama is not “anything negative”. Specifically, it must be harsh (sweetly lying would not be considered drama) and focused at the man (angrily complaining about her boss at work would not be considered drama). Drama is a female trait. (Men have guy-drama.)

(I'm not going to discuss guy-drama today since that's a very different animal from normal drama.)

The problem with this definition is that it's impossible to achieve a consistent state of happiness in any relationship you have if you hold human beings to such impossible standards. I don't know if you've noticed, but even "good" people can be dramatic, bitchy, irrational, and secretive, and they're like this pretty damn often. If you demand that your perfect girl who is Not Like The Rest™ never does anything bad ever, you'll never be happy.

Where I differ strongly from most other people is that when I date a woman, I expect her to be flawed. I fully expect her at certain times to do and say things that make no sense, and get flustered or angry about things that have nothing to do with me and/or are completely outside of my control. That's what girls do. Moreover, I expect some of this no matter how old, intelligent, classy, or educated she is. I expect these things because she's a human being, and that's how human beings work. As in all things, I am rational about my expectations, and adhere my expectations to the real world, not some Guy-Disney fairytale.

So if I'm spending time with a woman I care about (whether she's an FB, MLTR, or OLTR doesn't matter), if she starts getting upset about something, that's perfectly fine with me. That's not "drama". It's simply her exhibiting normal human behavior that I can't do much about, even if I scream at her with a bunch of guy-drama and command her to never do that again (like that works long-term). Certainly I can reduce the amount and frequency of negative behavior from someone in my life, but I can't eliminate it completely. Neither can you. It's foolish to think otherwise, and I'm saddened by the sheer number of men I see (of all ages) and women I see (usually over age 33) who expect 100% perfect behavior from their partners at all times.

Where I Draw The Line

So if a woman is washing dishes, cuts her finger, and starts screaming her head off about how furious she is about that, and how much she hates dishes, and how horrible her day has been, and how life is so unfair, blah blah blah...that's totally fine. I have no problem with this behavior whatsoever. Seriously. Women are emotional creatures and need to emote, so I'll let her do that.

But...and this is a big BUT...if in the midst of her tirade she whirls around and starts calling me an asshole because I didn't text her back last Thursday, now she's entered the unacceptable zone. This is now drama, since the negativity is directed at me. She now has about 20 seconds to calm down or she'll get an instant soft next.

Many men are under the opinion that drama is only when a woman is screaming at you. Wrongo. Drama is ANY type of negativity directed at you. The classic example of quiet drama is the famous "silent treatment", a weapon married women commonly use against their husbands (or live-in boyfriends). Though I myself have had MLTRs attempt to use this against me in the past once or twice.

Make no mistake, the silent treatment is drama. It doesn't matter if it's quiet; it's still negativity directed at you. That means the instant a woman refuses to talk to you or answer a question, provided your question is a nice one and you're keeping your tone of voice down, she needs to get an instant soft next.

Here's a real life example. Several years ago I was driving in the car with an MLTR. We were discussing something and I said something she didn't like. I forget what it was. Since she was aware that if she screamed at me I would soft next her, she just frowned, folded her arms, and looked out the window.

I asked her something about where we were going that evening. No response. She just sat there doing the silent treatment, starting out the window. I asked nicely, "Are you going to answer my question?" Still no response.

I simply said "no" a few times, said nothing else, didn't argue with her in any way (a key component of the soft next most men have trouble with), got to her house, nicely kicked her out of my car, didn't see or talk to her for four days, and had sex with someone else. After four days, our relationship resumed peacefully for another year or two, and she never did the silent treatment again.

My point here is that a woman's negativity can take all kinds of forms. True, it can be the standard loud screaming, threats, and name-calling, but it can also be the quiet, passive-aggressive silent treatment, or the attention-getting crying "at you", the guilt-inducing act of saying "Everything's FINE! No really, everything's FINE!!!", or the angry-mother-like power trip of refusing sex because you didn't do what you were told. All of that is drama. All of that is negativity pointed exactly in your direction.

Drama is also a matter of intensity. As I stated above in the definition, drama must be clear and harsh. This means that if a woman comes to me in a quiet, calm tone of voice, and says, "Hey, what you did yesterday really made me feel bad", that's perfectly fine. We can discuss that. Yes, it's negative, and yes, it's directed at me, but it's not harsh. Instead of taking an accusatory tone and stance, she's taking an adult tone with a frame of collaboration rather than attack or punishment.

If a woman comes to you calmly like this, and states something that you clearly did wrong, then you should apologize. Don't get into a big discussion, but do apologize if you were in the wrong. We're all human and we all make mistakes.

Again, though, she must come to you nicely and state this. If she walks up to you and starts screaming at you about something you legitimately did wrong, that's drama, and it's time for a soft next, and it doesn't matter if you were in the wrong. She chose to act like a child instead of an adult.

What if a woman comes to you calmly and sweetly, and complains about something, and it's something you didn't do wrong? What if it's just something she doesn't like about your behavior? In that case, you do exactly what I described in detail in this post here. You tell her that's the way you are, you're never going to change, and if she doesn't like it she can go date someone else. And by the way, you need to mean this. If you don't, you have oneitis.

So far, none of this is drama and is perfectly acceptable. If she starts raising her voice and accusing you of things or calling you names, now it's drama and now it's soft next time.

So to identify if something really is drama, and thus worthy of a soft next, ask yourself these questions:

2. Is it directed directly at me or at someone / something else? If not directed at you, it's not drama. If it is, go to question 3.

3. Is she speaking in a calm, quiet, tone and making rational sense and behaving like an adult? If yes, it's not drama; work with her collaboratively to solve the problem, if possible. If no, it's drama. Give her one warning, and if she doesn't calm down in about 20 seconds, soft next her ass immediately.

This article was originally published on June 4, 2014

« The Top 3 Things Businesses Do Wrong

The Economics of Jennifer Anniston »