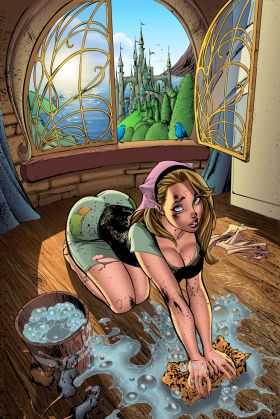 Once upon a time, there was a great and powerful warrior, Lord Mars, who was the champion of many great battles. In time, he took a wife, a beautiful maiden with skin like white milk and hair like spun gold. They had a single daughter, Arabella, every bit as beautiful as her mother. The three of them lived in a great white manor atop a hill along with their retinue of servants, for Lord Mars was a great leader of men.

Though there was sadness when Lord Mars went abroad to fight his wars, the three of them were happy.

When Arabella was sixteen years old, a great plague came to the land, and her mother was stricken dead. Mars and Arabella grieved alike. The day his wife died, a light went out in Lord Mars' eyes...never to return.

A year later, Lord Mars remarried, this time to Lady Tremaine, a haughty and shrewish woman. She moved into the manor along with her two ugly daughters, Drizella and Anastasia.

Immediately the household changed. Lady Tremaine constantly screamed at Lord Mars, ordering him about, forbidding him to leave the house to fight his great battles. Once a great and powerful man, Lord Mars began to cower in the face of his new wife. Lady Tremaine also placed her two daughters in charge of Arabella.

Drizella and Anastasia, jealous of Arabella's stunning beauty, sweet voice, perfect blonde hair, huge breasts, flat stomach, swinging hips, and round buttocks, forced her to preform the most menial of tasks around the manor. Lord Mars, his power as a man drained, was helpless to stop them, lest he be yelled at by his new strong wife.

Arabella's cruel sisters forced her to sleep in a barren and cold room with no bed, forcing her to curl up near the fireplace for warmth. Every morning she would arise covered in cinders, which her sisters would forbid her from washing off, giving her a new mocking name, "Cinderella".

As this was transpiring, the old Emperor sat upon his golden throne, deep within the iron fortress at the center of the great city. He leaned forward, coughed, and scolded his son, Prince Arming.

"The time has come," said the Emperor, "For you to find a wife."

"A wife?" Prince Arming laughed, as he adjusted his twin +5 Katanas of Logic scabbarded on his hip, "What a silly thing. I am a lord, warrior, and prince. I sex whomever I wish, and will continue to do so. Forever limiting myself to one woman? Ha! Surely you are mad, father."

"Be that as it may," said the Emperor, wagging his finger, "For you to succeed me and become Emperor, you must be married. It is the law, one not even the Emperor himself is above. If you do not wish to take a wife, I will have to appoint one other than you. Do not force my hand thus."

"Shit," said Prince Arming, rolling his eyes, "Very well, very well. I shall take a wife then, but I shall continue to sex whom I will."

"As you wish," said the Emperor, knowing that as a young man, he himself did the exact same thing.

The Emperor then recommended several woman he thought would make good wives for his son and future Emperor. Prince Arming laughed, and said instead he would choose his own wife, the most beautiful woman in the land. He decreed that all women wanting to become his wife must attend a ball within the iron fortress. Then, after sampling each that struck his fancy, he would choose the lucky one to be his wife.

Invitations were issued, and Lady Tremaine informed her two daughters that they were attending, and that she would purchase for them the finest gowns to wear. When Cinderella asked if she was also going, Lady Tremaine sneered, "Of course not, fool. Who shall sweep the chimney while we are gone? Certainly you realize our servants require aid!"

Cinderella protested, and Anastasia laughed, and Drizella slapped her across the face, sending her spinning to the floor. Lord Mars stood up to protest their actions, but one glare from Lady Tremaine put him into silence again. He looked down, staring at the floor like a whipped dog, saying nothing.

Cinderella wept from her cold room, her ample bosom heaving, as she watched the four of them, dressed in their finery, leave for the ball.

Suddenly there was a great light, and from the light emerged a Dark Sorceress. "Fear not, Cinderella," the Sorceress said, "For I shall assist you. Years ago Lady Tremaine did me a great injustice, and now I shall affect my vengeance. For you are indeed the hottest woman in all the land. You shall attend the ball, and win the heart of Prince Arming, and put your foul stepsisters and stepmother to shame."

"But, I have no gown," said Cinderella, "No carriage, no slippers, no-"

"Oh just shut up and watch," said the Sorceress. With that, she snapped her fingers, and instantly Cinderella was washed clean, makeup applied, and clothed in the finest and sexiest gown that was ever beheld by man or woman alike. On her feet were two glass slippers that shined like jewels in the firelight.

Again the Sorceress snapped her fingers, and a sleek, black carriage appeared in the courtyard, the like of which Cinderella had never beheld.

"What is that?" Cinderella asked.

"It is called a Lamborghini," said the Sorceress, "And it is self-driving. Go within and it shall take you to the ball at over 200 miles per hour."

Not quite understanding, but obeying, Cinderella entered the Lamborghini.

"One word of warning though," said the Sorceress, "The spell breaks at midnight! So you must leave the ball well before then, lest you reveal this deception."

Cinderella nodded, thanked the Sorceress, and with a whoosh and a roar, the strange carriage took off into the night.

At the ball, Prince Arming lined up all the women in attendance in groups as they entered, picking only the most beautiful ones, and telling the rest to go back home. Then he proceeded to have sex with all the remaining women, often two and three at a time, making careful notes of their performance afterwards on a spreadsheet. After all, he thought, one must make an informed decision about these things.

On and on the night went like this, more women, more sex, until Prince Arming was quite tired and began to think he could take no more...when in walked Cinderella. She was indeed the most beautiful woman he had ever seen, and that was saying something.

He walked up to her, grabbed her by the waist, pulled her mound of perfect blonde hair, and said, "I must have you. Now." Then he proceeded to have sex with her for two hours straight, just her alone, and it was as if heaven became manifest on Earth, not just for him, but for her as well.

Afterward, as he held her close in bed, the clock struck midnight. Cinderella dashed out of bed, grabbed her clothing, and made for the door. Prince Arming asked where she was going, and what the cause was for her rush, but she ignored him and continued to run.

Out onto the street she dashed, into the Lamborghini, and it tore off into the night...but seconds later, the strange carriage vanished, and her clothes became rags once again, but no one saw the transformation.

The next morning, Prince Arming planned to make visits to every home in the land to find the mysterious golden-haired women who captured his heart as well as his cock.

"How do you intend to identify this woman?" the Emperor asked, "After you bedded so many last night?"

"With this," said Prince Arming, and he withdrew a single glass slipper. "Last night, in her mad dash for the exit, she left this in my chambers. All I need to do is go to each home and-"

Suddenly he fumbled, and the glass slipper feel out of his hand and shattered on the stone floor.

"Now what will you do?" the Emperor asked.

"Well," said the Prince, "I guess I'll have to have sex with all of those hot women again. Then I shall identify my beauty." With a wink and a smile he added, "Oh, poor me."

For the next several weeks, Prince Arming went all across the kingdom, happily bedding the most beautiful women in the land once again. Eventually, he made his way to Lord Mars' manor on the hill. Lady Tremaine welcomed him, and bade him to make love to her two ugly daughters. When seeing the two, the Prince replied, "Uh, yeah, no. Not in a million years."

Then he spied a dirty girl scrubbing the floor down the hall, whom he assumed was a maidservant, and said, "I will take that maid over there though. She's a little dirty but she'll do."

So the Prince made sweet love to the dirty maidservant, and to his shock and awe he discovered halfway though that it was indeed Cinderella, the perfect beauty from the night at the ball.

In a grand ceremony, Prince Arming wedded Cinderella, and he became the new Emperor. His first act was to order the beheading of Lady Tremaine and her two ugly daughters.

From that day forward, Prince Arming and Cinderella in their new open marriage lived happily ever after...

...until they got divorced about seven years later, at which time Prince Arming married a new wife many years his younger, and Cinderella married a beta male who took out the trash whenever she yelled at him.

This article was originally published on June 15, 2014