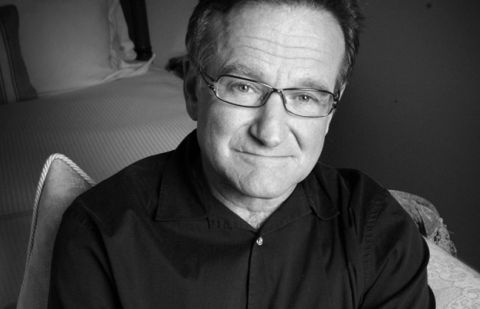 You already know that Robin Williams killed himself a few days ago. Hearing the news made me feel a little sick. Williams was a genius, a man I grew up watching as a child and teenager and studied as an adult for my own professional speaking. I hate hearing news like this.

You're going to hear a lot about Robin Williams over the next few weeks, but there's one key aspect about his death you may not hear a lot about. His suicide was due to depression. True. He was a genius and geniuses like Williams often live very difficult lives. Also true. He probably suffered from bipolar disorder or something similar. Also true.

Given all of that, now I'm going to give you one of the biggest reasons for Williams' depression:

It was alimony.
Sound crazy? As always, I will be as objective as possible in covering the facts, and you can make up your own mind. Let's take this step by step.

Williams married his first wife in 1978. As usual with men, he did not demand a prenup. I'm sure he used the standard excuse many of you give me. "I don't have any money, so I don't need one."
Then he became rich and famous. Oops. Now he needs a prenup. But oops, he's already married, so it was too late. (See why not getting a prenup because you "don't have any money" is stupid? Do you plan on NEVER having any money at any time in your future?)

As famous Alphas always do, he cheated. He gave herpes to one woman he cheated with, and she sued him. They settled out of court, which is a nice way of saying he had to pay her a shitload of money.
Then he started having sex with his nanny. Of course his wife didn't like any of this, so she divorced his ass. Without a prenup, he was forced to pay her millions of dollars. He hints about how much money he lost and the pain he suffered during the divorce right here:

Should he have cheated? No.
Should he have gone around giving people herpes? No.
Should he have fucked his own family nanny who lived with him and his wife? No.
These are all reckless, high-risk, high-drama actions that will do nothing but cause trouble and chaos for you and everyone in your life. Cheating is bad and I'm completely opposed to it. Open/poly relationships are far superior to cheating because you can have sex with anyone you want without sneaking around like a thief in the night. Secretly cheating, hoping your wife/GF won't find out, is wildly incongruent to what a man truly is.
Here me on this: I'm not defending Williams' above actions.

That being said, as I've said many times before, women married to rich, famous, powerful Alpha males know god damn well that these men cheat. There is no surprise and these women need to expect this behavior from men like this, especially crazy Alphas like friggin' Robin Williams. (I mean, Jesus lady, you married Robin Williams. What the fuck did you expect?)

Moving on, Williams married the nanny right after the divorce. Once again, he did not get a prenup. There's no way to know what he was thinking of course, but having spoken to a multitude of men about this very issue, I'm reasonably confident he was thinking things like, "We don't need it. She won't do anything like that. We're in love. She's a good Catholic girl. She's Not Like The Rest™.  She wants to be married forever. It's what she's always wanted. She hasn't fucked a lot of other guys before me. She's a Good Girl™. This will work. We don't need a prenup."

As everyone knows, Williams has always had trouble with drugs and alcohol. He was 20 years sober, into his second marriage, when he relapsed in 2008.

His wife's response? She divorced his ass.
While Williams entered rehab and by all accounts has remained sober ever since, "the trust was broken," says a close friend of the couple. "She's hurt." They quietly separated on Dec. 31 (she stayed in their San Francisco home with Cody; he moved to Marin County), but "the marriage," says another pal, "has been over for a long time."

Isn't marriage wonderful?
Because he had no prenup, he had to pay out massive cash to a woman yet again. Total cost of both divorces? Around $27 million, which was pretty much everything he was worth. Never mind the fact that during his marriage he raised millions upon millions of dollars for charity in various ways through vehicles like Comic Relief, St Jude Children's Hospital, the Red Cross, the USO, and several others. Nope, none of that matters. He's the man, she's the woman, so he must pay her millions, or he goes to prison.

Almost bankrupt, having no way to pay all these bills, he was forced to do television work, saying:
"The idea of having a steady job is appealing. I have two [other] choices: go on the road doing stand-up, or do small, independent movies working almost for scale [minimum union pay]. The movies are good, but a lot of times they don’t even have distribution. There are bills to pay. My life has downsized, in a good way. I’m selling the ranch up in Napa. I just can’t afford it anymore."

The "appealing" part and the "in a good way" part were bullshit. He later admitted he didn't want to take the job. He was forced to because of his financial condition.

When asked about all the money he lost in his divorces, he responded:
"Well, not all. Lost enough. Divorce is expensive. I used to joke they were going to call it ‘all the money,’ but they changed it to ‘alimony.’ It’s ripping your heart out through your wallet. Are things good with my exes? Yes."

So he took the stupid television job, a new series called The Crazy Ones, which was quickly canceled. Then Williams was even more depressed, having no way out, and no way to pay his ridiculous alimony...
The actor recently confided to a family friend that he had “serious money troubles,” and was worried about his family’s financial security.

According to a family friend who had spoken to Williams recently, “All he could talk about were serious money troubles. There were clearly other issues going on and Robin sounded distant during the telephone conversation. Robin was known for being so generous to his friends and family during the height of his success, and would help anyone out that needed it.”
“There was also frustration that Robin expressed at having to take television and movie roles he didn’t want to take, but had to for the paycheck,” the source said.

Just a few weeks later, Robin Williams went to his bedroom, secured a belt between the door and the frame, and hanged himself.
Yes, the man had other issues, but look at the above facts and ask yourself if alimony had nothing whatsoever to do with his death.
Societal Programming destroys yet another great man.
And yes, we'll all nod sadly and talk about how horrible it was he died, and how unfair and evil alimony is.
But will alimony be repealed?
No.
Will men start demanding prenuptial agreements more often?
No.

Want over 35 hours of how-to podcasts on how to improve your woman life and financial life? Want to be able to coach with me twice a month? Want access to hours of technique-based video and audio? The SMIC Program is a monthly podcast and coaching program where you get access to massive amounts of exclusive, members-only Alpha 2.0 content as soon as you sign up, and you can cancel whenever you want. Click here for the details.
[vc_row_inner][vc_column_inner][vc_raw_html] JTNDYSUyMHRhcmdldCUzRCUyMl9ibGFuayUyMiUyMGhyZWYlM0QlMjJodHRwcyUzQSUyRiUyRmFscGhhbWFsZTIwLmthcnRyYS5jb20lMkZwYWdlJTJGcFU1ODMlMjIlM0UlMEElM0NpbWclMjBzcmMlM0QlMjIlMjBodHRwcyUzQSUyRiUyRmNhbGViam9uZXNibG9nLmNvbSUyRndwLWNvbnRlbnQlMkZ1cGxvYWRzJTJGMjAyMCUyRjA4JTJGVFVNLTcyOFg5MC0xLnBuZyUyMCUyMiUzRSUzQyUyRmElM0UlMEE=[/vc_raw_html][/vc_column_inner][/vc_row_inner]
This article was originally published on August 14, 2014