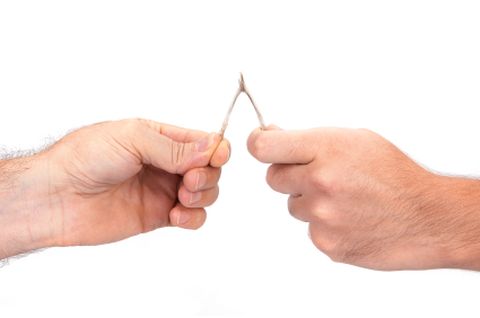 This is an analogy I use in one of my ebooks that I'm going to expand upon here. The Co-Owned Shovel Let’s say you have a next door neighbor, and both of you need a good, solid shovel for some outdoor projects. In order to save money, you both go in 50/50 for a really fantastic, $200 shovel. You each kick in $100. Now you both co-own the shovel 50/50. You both decide to keep it over at your neighbor’s house, and just schedule with each other when you need it.

The day you buy the nice new shovel, you both admire it in your neighbor's garage. Damn, what a great shovel. You're going to both get some serious work done with that baby. And you both saved $100! You pat each other on the back and congratulate each other on your mutual genius.
But soon, problems arise.

Sometimes both of you need it at the same time. You're both buddies, so you don't argue about it. However, it does mean that one of you gets it to complete his landscaping projects while the other has to compromise and be unable to use it when he wants it. Not a major problem, but it sort of nags at you in the back of your mind that this wouldn't be a problem if you each had your own shovel.

Not a big deal, but soon things get worse.
One day you go out to your neighbor’s yard to use the shovel, and you see him using the shovel to smash rocks on his concrete retaining wall.
“Whoa!” you cry, “What the hell are you doing? That’s not what a shovel is for! You’re going to damage it!”
He responds, “Whatever, dude. It’s my shovel and I can do what I want with it.”
“It’s my shovel too!” you scream, “And I don’t want you damaging it!”
And now, you argue. You now both have drama.

It's a tough situation, since you’re both in the right. You both co-own the shovel equally. Both of you have differing opinions about how the shovel should be used, and since no man can use his own property "wrongly," neither of you has the moral high ground over the other. Since the ownership is exactly 50/50, one cannot force or command the other to do anything.

So you’re both stuck. You simply continue to argue and argue, getting more and more pissed off, until one of four things happen:

1. One of you finally throws his arms in the air, gives up, and acquiesces to the other. Therefore, one person gets what he wants, and the other now harbors resentment. This creates a permanent rift in your long-term friendship, which prior to getting the shovel was pretty much problem-free.

2. One of you uses shrewdness or strength of personality and verbally forces, corners, or tricks the other person into doing it their way. The other person grudgingly goes along with it, but still harbors resentment, and still feels defeated to some degree. Again, the friendship is damaged, at least a little.

3. One of you bribes the other person, promising some payment or service for going along with their way. But that’s stupid; why should you pay someone to use something that you already paid for and that already belongs to you?

4. Realizing it was a bad idea to co-own something with your friend in the first place, as he continues to scream at you, you hold up your hand and say, "You know what? I don't want to argue with you. You're my bro. I love ya man, and this shovel is damaging our friendship. So hang on. I'm going to solve this problem right now." You proceed to tell him to give you $100. That way, the shovel will then be 100% his, and he can do whatever he wants with it. Then you and him won't need to argue about it ever again. Seeing that you're right, he agrees. He pays you $100, keeps the shovel, then you go to the hardware store and buy your own shovel. Problem solved, forever. No more arguing ever again, and your friendship remains solid and intact with zero resentment. More importantly, you've learned a valuable lesson about human behavior.

Now what would have happened if instead of co-owning the shovel you shared it instead?

The Shared Shovel
Let's say you need a kickass shovel for some landscaping you'll be doing. You purchase a beautiful, $200 shovel. It’s all yours, and you're very proud of it.
[vc_row_inner][vc_column_inner][vc_raw_html] JTNDYSUyMHRhcmdldCUzRCUyMl9ibGFuayUyMiUyMGhyZWYlM0QlMjJodHRwcyUzQSUyRiUyRmFscGhhbWFsZTIwLmthcnRyYS5jb20lMkZwYWdlJTJGcFU1ODMlMjIlM0UlMEElM0NpbWclMjBzcmMlM0QlMjIlMjBodHRwcyUzQSUyRiUyRmNhbGViam9uZXNibG9nLmNvbSUyRndwLWNvbnRlbnQlMkZ1cGxvYWRzJTJGMjAyMCUyRjA4JTJGVFVNLTcyOFg5MC0xLnBuZyUyMCUyMiUzRSUzQyUyRmElM0UlMEE=[/vc_raw_html][/vc_column_inner][/vc_row_inner]
One day your neighbor and good buddy comes over and sees it in your garage. He comments on what a fantastic shovel it is, and asks if he could borrow it sometime. Of course you say yes. He’s a good friend and you know he’s a trustworthy guy. As a matter of fact, you tell him he's more than welcome to take it out of your garage whenever he needs it without asking you. As long as you aren't in the middle of using it, and as long as he doesn't damage it, he's free to use it whenever he likes. You even tell him he can keep it over in his garage if that would be easier for him.

He feels happy about the trust you place in him. You feel happy about how generous you're being and that you're helping a good friend. You both get a little endorphin rush.
Do you have any problems? Nope.
Any time you need the shovel, you get it. It's your shovel. If you need it and it's over at your neighbor's house, you go and get it, and he hands it over immediately, since he knows it's not his shovel.

Will your buddy use your shovel to pound rocks and possibly damage it? Hell no. He's a responsible guy. He knows it's your shovel, not his shovel, so he takes good care of it. Even if one of his kids damages or loses the shovel, he immediately buys you a new $200 shovel without a second thought.
There's never any argument over when to use it or how to use it. Because it's YOURS, not BOTH OF YOURS. You're sharing it, not co-owning it.
The only possible problem you may have is if your neighbor is an irresponsible dumbass and damages the shovel without compensating you for it. But who's fault is that? Yours. You shouldn't share your stuff with irresponsible people. I certainly don't. But assuming you're a decently smart person, you're only going to share your stuff with responsible people and refuse to share your stuff with morons. Thus, you'll probably never have a problem.

Sharing vs. Co-Owning In Relationships

This explains one of my core concepts for long-term, serious relationships. You should share everything with your special girl, but you should co-own nothing. Assuming she's a responsible person, if you want to let her drive your car whenever she needs it, that's wonderful. But if you co-sign on a loan for a car you each own 50/50, then you're an idiot. You are virtually 100% guaranteed to argue about when that car is used and/or how that car is used. When you break up or get divorced, which you will eventually, you're going to have all kinds of financial problems and possible legal disputes over who gets the car.

Sharing is wonderful. Co-owning, at least in your woman-life, is extremely dangerous and literally invites problems into your existence. Do you like problems? Do you like drama? No? Then always follow this advice:

What I just said about the car applies to a house. If you want to live with a woman, go for it. Buy a house and own 100% of it, and let her live in it with you. If you want to charge her rent or something, then go ahead. She'll always know that it's your house. When you break up or get divorced (and again, you will) she just moves out. No problem.

But I see these idiot guys all the time refuse to get married and think they're being smart, but then turn right around and buy a house with a girlfriend 50/50. Oh, you sweet dumbass. Don't you realize that's almost as bad as getting married? When that relationship ends and one of you needs to move out, you're going to have to fight about who gets the house, who says in the house, whether or not to sell the house, etc. If you sell the house, you have to wait months and months dealing with a woman who is probably mad at you while you sell the damn thing, and likely when you weren't even planning on selling it.

This crap happens all the time, and as I've said before on this blog, I'm simply amazed that otherwise intelligent people still do this...go in 50/50 on a car, house, lease, business, boat, or whatever with their spouse, girlfriend, boyfriend, roommate, or whatever.
Truly, it's dumb beyond belief.
This also applies to things like checking accounts. I could tell you all kinds of horror stories about people, men and women both, who do this with lovers or spouses. I could expand this concept even further into marriages, and discuss why I constantly tell men to keep their finances completely separate even if you get legally married (and hopefully get a prenup). But I think you get the point by now. Share your wealth all you want. Give her all the money you like. But don't co-own your money (accounts, investments, debts, etc) with her. That's insane. Unless you enjoy problems and/or drama (and I know some of you do!).

I could even further expand this concept into why communism and real socialism has never worked no matter how many times it's tried, and why capitalism, even with all of its flaws (and remember I'm talking about capitalism, not corporatism which is what America has), has produced the greatest standard of living the middle class has ever seen. Human beings love to share, but we humans are really bad at co-owning stuff, even though we like to pretend we aren't.
Unless you enjoy drama, co-ownership is not a path to happiness. Share everything. Co-own nothing.

Want over 35 hours of how-to podcasts on how to improve your woman life and financial life? Want to be able to coach with me twice a month? Want access to hours of technique-based video and audio? The SMIC Program is a monthly podcast and coaching program where you get access to massive amounts of exclusive, members-only Alpha 2.0 content as soon as you sign up, and you can cancel whenever you want. Click here for the details.
[vc_row_inner][vc_column_inner][vc_raw_html] JTNDYSUyMHRhcmdldCUzRCUyMl9ibGFuayUyMiUyMGhyZWYlM0QlMjJodHRwcyUzQSUyRiUyRmFscGhhbWFsZTIwLmthcnRyYS5jb20lMkZwYWdlJTJGcFU1ODMlMjIlM0UlMEElM0NpbWclMjBzcmMlM0QlMjIlMjBodHRwcyUzQSUyRiUyRmNhbGViam9uZXNibG9nLmNvbSUyRndwLWNvbnRlbnQlMkZ1cGxvYWRzJTJGMjAyMCUyRjA4JTJGVFVNLTcyOFg5MC0xLnBuZyUyMCUyMiUzRSUzQyUyRmElM0UlMEE=[/vc_raw_html][/vc_column_inner][/vc_row_inner]
This article was originally published on February 5, 2015

« America Is Not A Democracy