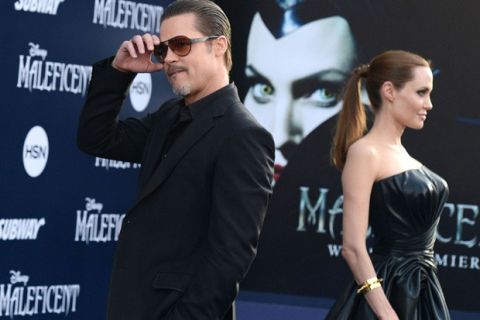 I didn’t want to talk about this. Seriously. As soon as I heard the news I just nodded, since it was something I’ve been expecting for many years, and went about my day. However, last week I received a bucket of emails from you begging (yes, some of you begged!) for me to talk about this.

I responded to some of them saying that if I wrote about this, it would simply be a repeat of what I’ve said perhaps thousands of times over the last eight years. But you guys still wanted me to write about this, and since this blog belongs to all of you as much as it belongs to me, I’m here to serve.

Brad and Angelina are considered royalty, not only here in the US but around the world. When the most beautiful man of the 90s-2000s shacks up with the most beautiful woman of the 2000s, it’s pretty much custom-made tabloid Disney candy for the entertainment press and the unwashed masses.

Of course I knew from day one that they would be headed for a breakup (not a divorce, since they were not married for most of their relationship). As always, it was only a question of when. Unlike other monogamous celebrity couples, my guess was that they would actually last around ten years, mostly because Brad Pitt is a total beta. Wait a minute. Did I just say Brad Pitt is a BETA? Yep. He’s a classic example of betaization. A bad boy Alpha who marries (or co-habits in this case) a Dominant (Angelina) who cracks the whip on his ass and slowly, over many years, turns him into a pussy.

If you look up betaization in the dictionary, you’ll see a squinting picture of Brad Pitt. No wonder he smokes all that weed. If I was married to Angelia Jolie I would too. (If I was dating Jolie or banging Jolie, I’d be a happy boy. But if I was living with her in a monogamous, married-like relationship...ugh...pass that blunt, dude.) Here’s what I said about Brad Pitt ten months ago in a comment on this blog: For the record, I don’t consider Brad Pitt an Alpha any more. In every interview I’ve seen with him and Angelina, she looks like she wears the pants and he looks pretty whipped. Just because a guy is good looking or famous doesn’t mean he’s Alpha. (Though he was probably Alpha on the way up to that condition.) Yup.

As always, we need to start with the facts. (I’m not going to link to these, because I just don’t care enough about this silly shit, and since news about this has already taken over the internet. Feel free to Google these if you want to confirm them.) Note: all allegations and suppositions at this point are simply those, and may be untrue. Also note that this post was written on September 23rd, 2016, so any new facts that have come to light since then won't be reflected.

- Brad Pitt married Jennifer Aniston (another Dominant, though not as bad as Jolie) in 2000. Jennifer is someone I've written about before. In their continuous effort to shove false Disney Societal Programming down our throats, the marriage was considered by the media to be a “rare Hollywood success.” WAAAAHAHAHAHA! I knew back then their days were numbered, and so did you, unless you were a delusional moron.

- Since human beings are not capable of long-term sexual monogamy, by 2005 Pitt was cheating on his wife by banging Angelina Jolie. Brad then (essentially) left Aniston for Jolie, even though Aniston was the one who filed divorced papers, matching the statistics that it’s usually the woman who initiates the divorce 70-80% of the time.

- The Jolie / Pitt relationship has been widely considered by those in Hollywood to be "one that will probably work." WAAAAAHAHAHAHA! As always, Disney and irrationality always trumps reality and objectivity. In a mental battle between emotions and reality, emotions will win almost every time.

- Jolie earned the hatred of women all over Hollywood for “stealing” Pitt from Aniston, much of which smolders to this day, as evidenced by Chelsea Handler’s recent rant, calling Jolie a psychopath. (Which may not be too far from the truth. Jolie used to make out with her brother and wear a bottle of Billy Bob Thornton’s blood around her neck.)
These people fail to remember that by fucking Brad Pitt, Jolie wasn't violating any promises she made to anyone. That would be Pitt who was the liar and the violator. But for some reason, he got a pass and Jolie was made to be the bad guy. If your monogamous wife fucks a dude because he's hot, do you blame the dude or your wife? The correct answer is, your wife. She's the one who cheated on you, lied to you, and violated promises she made. The dude she banged perhaps acted crassly, but he didn't do any of these things. Sadly, people fail to remember this.

- Since Jolie had already been divorced twice (and Pitt once), they decided, or should I say, Jolie decided (since she clearly ran the relationship) to not get legally married. Good for them! Too bad they turned stupid a few years later.

- Since it’s pretty much a law that all Hollywood actors must be left-wingers, Jolie and Pitt later used the excuse that they didn’t want to get married until gay marriage was legal. They were full of shit of course, and stupidly and ridiculously got legally married in August of 2014, when gay marriage was still illegal. coughliarscough!

- Not being quite a stupid as Britney Spears, Jolie and Pitt did sign a prenup. It’s rumored that Jolie put an “adultery clause” in there, though reports conflict as to exactly what that means. Speculation ranges from Pitt getting royally divorce raped if he cheated on Jolie in any way, all the way to Pitt may actually be allowed to bang women on the side as long as he didn’t get serious with them (a standard OLTR rule, and a wise one). Of course, if Jolie allowed Pitt to get laid on the side, she would become one of my new heroes, alongside Will Smith and Jada Pinkett. However, reports conflict, this is just speculation, and we will probably never know the full truth.

- Since humans are not capable of long-term sexual monogamy, Pitt apparently cheated on Jolie, allegedly with a shockingly unattractive and married French actress named Marion Cotillard. (And I would bet $10,000 that Jolie cheated on Brad a few times during their 12 year “monogamous” relationship as well, but you won’t ever hear about this in the media. The media has a vested interest in keeping at least of semblance of Disney alive, so we can't have both icons cheating on each other.) Marion Cotillard of course denies everything because her husband is standing right next to her. (Though in his defense, he's French, so he would understand.)

- As I’m typing these words, Marion Cotillard has just announced that she’s...pregnant. Ohhhhh fuck. Again, she's married, so this may mean nothing, but boy, the timing looks really bad. If Brad’s the father, then not only is he a beta, but he’s also a dumbass too. (Again, I wouldn't be surprised. Brad Pitt never seemed very sharp to me.) And for the record, yes, beta males cheat too. Betas are still men. The only difference is that betas wait much longer to cheat than an Alpha typically does.

- Jolie filed for divorce last week, once again showing that the woman is almost always the one who divorces the man, not the other way around. She swears the divorce has nothing to do with infidelity, only Pitt’s drinking, smoking, and parenting skills. So wait a minute, Sweetheart. After 12 years of living with this guy, now you’re suddenly pissed about this? Uh huh. She has demanded full custody of their six children (three biological, three adopted) with 90% visitation time for her and 10% for Pitt. AAAAHAHAHAHAHAHA!

- Pitt is now under official investigation for child abuse, since allegedly during a private flight, he got drunk and got violent with the kids and Jolie. Unfortunately, I think this is pretty likely, perhaps more likely than the affair allegations. Pitt admits “something happened” but is keeping public details quiet. Uh huh. These artsy actor types love to get drunk and violent. To see what this looks like, just take a look at the recent video showing Johnny Depp getting violent with Amber Heard, yet another utterly ridiculous and easily preventable divorce that should have never happened (because they should never had gotten married in the first place).

Still think marrying this shrew and having six kids with her was a good idea, Brad? You sad, silly dumbshit. Time to reap the poison whirlwind of modern day marriage, otherwise known as “divorce” and “losing your kids.” Good luck with that! Just like when I talked about Scott Adams’s divorce, if I had sat down with Brad a few years ago and told him not to get married, that it would hurt him and hurt his children if he did so, he would have called me names and told me to fuck off. Just like when I talked about Ashton Kutcher and Demi Moore’s divorce, the woman in the divorce will now demand the most insane, irrational, unfair shit imaginable, putting the law and the culture on her side and putting the man on the defensive. She will likely get more of what she wants from the divorce and custody battle than he.

Just like when I talked about Tom Cruise and Katie Holmes’ divorce, man and wife will now go to absolute war with each other, making fools out of each other, wasting years of their time for no reason, and permanently scarring both of themselves and their children. All because they couldn’t control their own false, irrational, bullshit, outdated, Disney urges despite knowing better.

As I’ve said, loving a woman, co-habiting with a woman, and/or having children with a woman doesn’t require a legal nor monogamous marriage. That shit doesn’t work any more, and hasn’t for several decades, and the divorce stats and infidelity stats get worse every year. If you want to move in with her, follow these instructions here. If you want to have kids with her, follow these instructions here. It’s not difficult to do this stuff correctly and safely within the realties of a fallen world where lifetime marriage no longer exists, and where lifetime sexual monogamy never existed.

I know, I know. I’m sure when YOU get legally and monogamously married, none of this will happen to you. These People Are Just Dumb Celebrities™. Not like you. Oh no, you Know What You’re Doing™ and She’s Not Like The Rest™. Yeah. And when you send me that “Okay BD, you were right...” email in a few years when you’re sitting in divorce court or your child custody hearing, getting lectured by a female judge about what a horrible person you are while getting your wallet and savings accounts emptied, I’ll try to not remind you that you should have listened to me instead of calling me an asshole.

Next up on the soon-to-be-divorced list, Jay Z and George Clooney! Jay Z will probably go first. Ohhhhh, that’ll be so much fun. When Alpha Male 1.0s like that get divorced, the war goes nuclear. (Hopefully Clooney isn’t stupid enough to have kids with that ball-buster...)