Where Are The Disney Princesses Now? 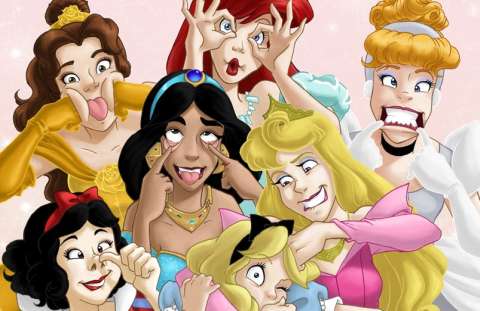 Where Are The Disney Princesses Now?

The Three Queens sat arrayed around the triangular table within the highest tier of the palace. Queen Aurora, Sleeping Beauty herself, tossed her hair, downed her fifth glass of wine, and hurled the empty crystal goblet over her shoulder. It shattered into a thousand tiny pieces against the muraled wall, a nearby guard ducking out of the way at the last minute. “Did I hit him?” Aurora asked, her words clearly slurred, as she clumsily wiped her mouth with the cuffed lace of her gown.

Queen Snow White, the Fairest of Them All (though not these days, with ever-new wrinkles appearing on her once flawless, alabaster skin), laughed her melodic, tittering laugh, and said, “No dear, you missed him again.” The three small blue songbirds that circled her head also laughed, in their chirping, avian way.

“Dammit,” muttered Aurora, and poured herself a fresh glass. At the head of the table, closest to the window, sat the Grand Queen, the Queen of Queens, Queen Cinderella, her golden hair sparkling in the fading sunlight. She waved a majestic hand and said, “Guard, summon my husband. I just remembered something I need to tell him.” As one of the many guards nodded and moved to exit the vast room, Snow White added, “Oh yes, summon mine as well!” The guard nodded again, but continued to move towards the door, knowing full well the consequences if he did not obey the orders of the Queen of Queens with alacrity.

“What about you, dear?” Cinderella said to Aurora, “Should we also summon your husband as well? Your King Phillip?”

“Fuck him,” Aurora snorted, summoning yet another bout of tittering laughter from Snow White and her songbirds.

“Such a foul mood, my dear,” Cinderella sang, “Surely the good king is not all that bad?”

“Yeah. You try fucking him,” Aurora spat, and took another swig.

“Oh my!” Snow White said, her hand on her chest, “You are a hoot, Aurora! We should do this more often, ladies.”

“My love,” Snow White said to her husband, “I wish for the four gowns I desired to be sent up here forthwith. I wish to show them to my friends.”

“Well, my love,” the King said, “If you recall, the gown made of the golden lace was not going to be ready until this Friday, so…” His voice trailed off when he saw Snow White glare at him. Her three songbirds, who had since landed on her shoulders, also angrily glared in his direction. “You will have all four gowns brought up to me within the hour,” Snow White commanded, still glaring, “Or would you like to lose your other eye? My friends so enjoyed your first one.” She glanced down at the pretty birds on her shoulders who still stared at King Prince with a hungry gaze. King Prince shuddered and backed up two steps. “At once, my love, at once,” he said, then turned on his heels and left.

“What an asshole,” Aurora muttered. “And you, my husband,” Queen Cinderella spoke with her perfect voice, “Come forward, I wish to share something with you.”

King Charming hesitated a little, quickly glancing at the guards, who were of no assistance. He took a deep breath and strode towards the table. “Look to the royal gardens, my love,” Cinderella sang, “Out the window. Do you see?” King Charming slowly and carefully looked out the window to see the landscape of the kingdoms spread out before him in the dying sunlight. “Yes,” he said finally, “I see our gardens. They are beautiful. Do you not agree?”

“Indeed,” said Cinderella, “They are beautiful. Though, look to the raspberry bushes yonder. Do you see?”

“Do you not recall I ordered cherry trees there? Not raspberry bushes, but cherry trees, my love.”

“No, my Queen. You very clearly said you wanted raspberry bushes. If you had wanted cherry trees, I would have made it so.”

“Is that right?” Cinderella asked, smiling her perfect smile. Before the King could answer, she made an ever-so-slight movement of her hand, and suddenly the King found it difficult to breathe. He moved his hands to his throat, trying to pull air into his lungs, failing.

“That sounded like you disagreeing with me, my love,” Cinderella continued in her sweet, charming voice, “You know how I feel about that.” King Charming was now on the floor, gasping and wheezing for air. Since her Fairy Godmother had died (some say murdered) several years ago, Cinderella had inherited much of her magic, and had learned to employ it to good use. “Did I say cherry trees, or raspberry bushes?” King, as best he might, pushed out the words, “cherry trees” as a barely audible whisper.

“Ah,” said Cinderella with a smile, and instantly the King could breathe again, air returning to desperate lungs, as he rose from the floor. The guards, as usual, tried not to look. “We shall see cherry trees planted in the royal garden by Friday,” said Cinderella, “Yes?”

“Ah,” said Cinderella, “How I love you so! You are the most wonderful husband in all the lands!”

“And you are the most wonderful wife,” the King said hoarsely, trying to loosen his collar.

“You may go now,” Cinderella commanded.

“And bring more wine,” Aurora added, hurling an empty wine bottle at the floor, shattering it by a nearby guard’s feet.

“It shall be done,” said the King, as he practically ran from the room.

Snow White clapped a dainty clap. “Cherry trees!” she explained, “How marvelous! I shall do the same in my royal garden! You should as well, Aurora!” In answer, Aurora waved her hand in the air and made a “pffft” sound.

“You know, Snow White,” Cinderella said, “This is fun indeed! We should start doing this more often.”

“Yes, yes,” Snow White agreed, “A girl needs refuge from her husband, after all.”

“Indeed she does,” said Cinderella.

And so it was that the Three Queens made a pact that they would meet, as today, on a regular basis. And for a time, they were… less unhappy. The End.

Want over 35 hours of how-to podcasts on how to improve your woman life and financial life? Want to be able to coach with me twice a month? Want access to hours of technique-based video and audio? The SMIC Program is a monthly podcast and coaching program where you get access to massive amounts of exclusive, members-only Alpha 2.0 content as soon as you sign up, and you can cancel whenever you want. Click here for the details.
[vc_row_inner][vc_column_inner][vc_raw_html] JTNDYSUyMHRhcmdldCUzRCUyMl9ibGFuayUyMiUyMGhyZWYlM0QlMjJodHRwcyUzQSUyRiUyRmFscGhhbWFsZTIwLmthcnRyYS5jb20lMkZwYWdlJTJGcFU1ODMlMjIlM0UlMEElM0NpbWclMjBzcmMlM0QlMjIlMjBodHRwcyUzQSUyRiUyRmNhbGViam9uZXNibG9nLmNvbSUyRndwLWNvbnRlbnQlMkZ1cGxvYWRzJTJGMjAyMCUyRjA4JTJGVFVNLTcyOFg5MC0xLnBuZyUyMCUyMiUzRSUzQyUyRmElM0UlMEE=[/vc_raw_html][/vc_column_inner][/vc_row_inner]
This article was originally published on March 8, 2018

« Moving Out of the Country: Renouncing Citizenship