The Difference Between Friends With Benefits and MTLRs 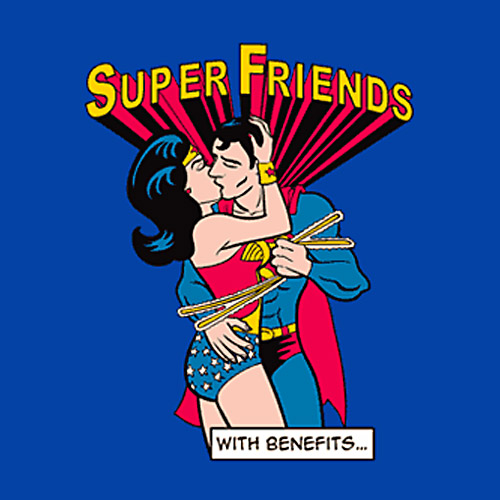 The Difference Between Friends With Benefits and MTLRs

One of the primary reasons I can date so many women at once and almost never experience drama from any of them is because I am always, always, 100% consistent with my behaviors towards them. I treat FBs like FBs, never like MLTRs. I treat MLTRs like MLTRs, never like FBs, and never like a girlfriend or OLTR. All the women in my life know exactly where they stand with me at all times, with no inconsistency and no deception. They are welcome to stay with me, or to leave me whenever they like without any complaints. Neither person is telling the other what to do. No drama from either is required.

What is the single most common problem men run into when first attempting nonmonogamous relationships?

It's this:
They screw up the delineation between FB and MLTR.

I define these two terms here and here, but just to review:

FB, or "friends with benefits" or "fuck buddy" is a woman you're regularly (or irregularly) having sex with, but you are not attracted to her beyond very simple friendship.
MLTR, or "multiple long term relationships" is a woman you're having sex with and actually dating. You have real feelings for her. You might even love her (but usually not...love is usually reserved for an OLTR).

The point here is that you're dating an MLTR, but you're just fucking an FB. And this, in a nutshell, is what guys screw up.
I've seen guys say things like, "So I was hanging out with my FB the other day. We went out to a movie, then we had dinner, then she gave me a bunch of drama about . WTF?"
If you're a sharp reader you should be able to immediately identify exactly what that guy did wrong. He took his FB out on date. Maybe he didn't view it as a date, but she did. Guys often don't realize the unspoken messages they're sending to women.

That's exactly what you don't do. You take MLTRs out on dates. You take your girlfriend or your OLTR out on dates. You do not take FBs out on dates. She was an FB, but he was treating her like an MLTR.
As a result, he was sending all kinds of mixed signals, which of course ended up in drama. Drama that was 100% his fault, not hers.

If you treat an FB like an FB, that's fine (as long as you're a nice guy about it). If you then start treating her like an MLTR, that's also fine. The problem comes when you start treating her like an FB again. She's going to immediately react with confusion, anger, and hurt feelings. Then you're in for drama and bitching. You're not being congruent or consistent with her.

The FB Behavior Set
Let's be very specific about how to treat FBs, and how not to treat them. The key is to treat them nicely and with respect, but not like a woman you're dating.

Hollywood, with it's pro-woman, anti-Alpha agenda, has done a great job at portraying a "fuck buddy" or "friend with benefits" as a negative, disrespectful thing. As a result, many women (especially the over-33s) are turned off by the label.

The common image is that of a guy fucking some chick's brains out, then rolling over and saying "Damn! Look at the time! I need to get up early tomorrow for work, so yeah, uh, you need to go now!". The very next image is the poor, half-dressed woman standing out on the sidewalk in the dark of night, her clothes bunched up in her arms, a hurt expression on her face. No.
This is not how you treat FBs. Not if you want them in your life for a very long time (which is always my goal). I have FBs in my life right now that I first started seeing back in 2007. If I treated FBs like the Hollywood version of the Alpha Male, such a feat would be impossible.

It's perfectly fine to spend time with FBs, both before and after sex. Many times an FB will come over to my place, we'll talk, maybe have a drink, then have sex, then relax for a while, talk while watching TV, then she'll go home. Much nicer.

Remember that the first word in "friend with benefits" is friend. I actually have one or two FBs in my life who are, in a sense, my closest friends. I'm serious. These are people I can really confide in, even in ways I can't with MLTRs (who might get jealous if I start taking about other women in my life). One of the many benefits of FBs over MLTRs is that long-term FBs never get jealous; they don't give a shit who you're having sex with. You're just an FB to them. Win / win.

However, notice that in the above example, all the time spent together is happening at my place. We are not meeting up at a restaurant to have dinner, or even lunch. We're not going to see a movie. We're not going to a picnic or the zoo or shopping or any of that shit. That's MLTR zone, and if you start doing that with an FB, you're in for some serious drama.

Your FB is your friend, not your girlfriend, and not a woman you're dating. Would you take one of your guy buddies out to dinner and then to a movie while paying for some or all of his expenses? Would you spend the night with your guy buddy in your bed? Probably not. Then don't do it with FBs. Thankfully I can read your mind, so here are some questions I can see you thinking...
[vc_row_inner][vc_column_inner][vc_raw_html] JTNDYSUyMHRhcmdldCUzRCUyMl9ibGFuayUyMiUyMGhyZWYlM0QlMjJodHRwcyUzQSUyRiUyRmFscGhhbWFsZTIwLmthcnRyYS5jb20lMkZwYWdlJTJGcFU1ODMlMjIlM0UlMEElM0NpbWclMjBzcmMlM0QlMjIlMjBodHRwcyUzQSUyRiUyRmNhbGViam9uZXNibG9nLmNvbSUyRndwLWNvbnRlbnQlMkZ1cGxvYWRzJTJGMjAyMCUyRjA4JTJGVFVNLTcyOFg5MC0xLnBuZyUyMCUyMiUzRSUzQyUyRmElM0UlMEE=[/vc_raw_html][/vc_column_inner][/vc_row_inner]
What if she asks to do that stuff?
You say no. Exactly how you say no is up to you. You can either give her an emphatic no, or you can just blow it off. If an FB ever asks me this kind of thing (which is very rare because I'm so congruent and clear with women) I will usually make some excuse about how busy I am. Which is true. If she keeps pushing, then I'll say no.

Again, me needing to do this is extremely rare. Women are very smart. They know when they're an FB...often before you do.

What if she's an FB, but later you decide to make her to an MLTR?

That's called an upgrade, and it's totally fine. It happens to me often. Some of my all-time favorite MLTRs started out as FBs who later impressed me and whom I upgraded as a result. (And I have downgraded MLTRs to FBs when they start screwing up.)

When you upgrade an FB to an MLTR, just start treating her like an MLTR (but still not an OLTR or GF!). Dates, spending the night, spending more quality time, romantic holding, all that great stuff can now be part of your relationship. Just be very sure that you're upgrading her to an MLTR because she deserves it and not just because you're getting lazy or needy.

Wouldn't it be okay to go out with an FB as long as you made her pay for her own food? And kept a solid frame?
Technically, yes. However most guys who try this end up fucking it up. So I would not do this unless you have a lot of poly/open relationship experience and really know what you're doing.

I do things like this occasionally, but I've been doing this open relationship stuff for years and my frame in this area is rock solid. It also helps if you go somewhere very cheap, like a fast food restaurant. This is also safer to do with younger women (under age 25), since older women tend their provider-sensors up more than younger chicks.

I don't see a problem with letting FBs spend the night. I do it all the time. Many men disagree with the "no FBs spending the night" rule I have. Well, okay then. If you start getting drama from your FB, you'll know exactly why. I'd rather not push the envelope. If there is a worst case scenario, like it's late at night and the FB is drunk or something, then I'll set her up on my couch, tuck her in, then go upstairs and sleep in my own bed.

The last time I spend the night with an FB in my bed was about a month ago when two women were sleeping with me, an MLTR and an FB. My bed is only a queen, and I'm a big bastard, so it was a little crowded. Thankfully both women were small. The FB actually got up in the middle of the night and went to sleep downstairs because she didn't like the fan I sleep with. Poor women...always getting cold.

But you can see how unusual a circumstance that was. Routinely spending the night with an FB, in your own bed after sex, is extremely dangerous and will cause the exact problems I'm trying to warn you against in this post. Don't do it. You asked if I would ever pay for a guy buddy if we hung out somewhere. Yeah, I've done that before. So what's the big deal if I do that with an FB?

The big deal is that your guy buddy is a guy. He's not a chick. When you pay for your buddy's movie ticket, he's not going to start running through all kinds of "What does this mean???" questions or "Wow, he really likes me!" thoughts for the next hour. He'll just think "cool" and then immediately forget about it and shift his thinking to popcorn. So even if you do pay for your buddies when you go out, that still doesn't make it a good idea for you to do it with your FBs.

What if your FB starts complaining that you're not taking her out and stuff? Do I even need to answer that? The answer is NEXT. Soft next her immediately. More importantly, once she's gone, examine your own behavior and make damn sure you didn't screw up the frame. If you look carefully, I think you'll find that you were treating her like an GF or MLTR, at least a little. An FB clearly bitching about how you're treating her is almost always indicative of something you did wrong several steps ago.

There's a reason my FBs never bitch at me, ever. (What little drama I do get usually comes from from MLTRs, where the nature and investment of the relationship is very different.) I hope this helps. As in many areas of life, the key to open/poly relationships is strength, clarity, congruence and consistency.

Want over 35 hours of how-to podcasts on how to improve your woman life and financial life? Want to be able to coach with me twice a month? Want access to hours of technique-based video and audio? The SMIC Program is a monthly podcast and coaching program where you get access to massive amounts of exclusive, members-only Alpha 2.0 content as soon as you sign up, and you can cancel whenever you want. Click here for the details.
[vc_row_inner][vc_column_inner][vc_raw_html] JTNDYSUyMHRhcmdldCUzRCUyMl9ibGFuayUyMiUyMGhyZWYlM0QlMjJodHRwcyUzQSUyRiUyRmFscGhhbWFsZTIwLmthcnRyYS5jb20lMkZwYWdlJTJGcFU1ODMlMjIlM0UlMEElM0NpbWclMjBzcmMlM0QlMjIlMjBodHRwcyUzQSUyRiUyRmNhbGViam9uZXNibG9nLmNvbSUyRndwLWNvbnRlbnQlMkZ1cGxvYWRzJTJGMjAyMCUyRjA4JTJGVFVNLTcyOFg5MC0xLnBuZyUyMCUyMiUzRSUzQyUyRmElM0UlMEE=[/vc_raw_html][/vc_column_inner][/vc_row_inner]
This article was originally published on May 19, 2013

« Why Do Women Get Fat? Some Empirical Evidence From My Dating Life