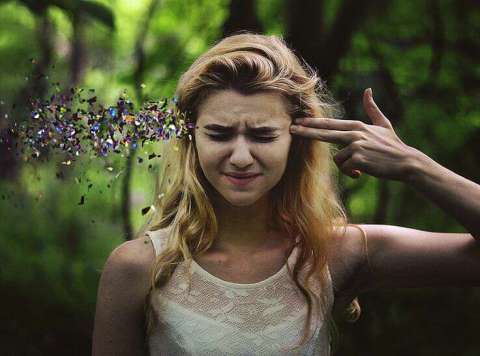 I love it when science continues to back up what I say. It’s fun. I have explained many times in books and blogs that women don’t want to be long-term happy like most men do. Rather, women desire to experience a range of emotions, both good ones and bad ones. Being happy literally every day would eventually get boring to a woman, so a woman in that condition will eventually do something to screw up her life so she can complain about it, thus experience the emotional range female psychology craves.

This is actually an edge women have over men in relationships, since women are comfortable being uncomfortable, and most men are not. I discussed this in great detail in one of the most important articles I’ve ever written right here. In that article, I show how miserable a life women have, and how, unlike men, they actually become accustomed to being unhappy. This is contrasted to men, who (for the most part) don’t like to be unhappy and will try to get out of unhappiness as fast as possible.

I have to be fair and state that not all men are like this. There are plenty of high-drama Alpha Male 1.0’s and a few miserable betas who actually enjoy regular unhappiness mixed with some happiness (look at the charts here), or even being in long states of unhappiness. Hardcore MGTOW’s, angry alt-right ragers, and perpetually angry far-left political guys are examples of this. But I am saying that most men do indeed desire to be happy and to minimize unhappiness at all times (even if they're too scared to achieve that state, which is the problem with beta males), whereas the percentage of women like this is essentially zero.

A recent study from the UK showed that, I shit you not, women are more miserable than men for almost their entire lives and are happier only in… get ready for it… their mid-80’s. Yep. That’s only what I’ve been saying forever. Of course women are less happy than men. Women don’t want to be happy (at least not in the long-term).The article is here, but here are a few notable quotes.

The number of Britons reporting consistent unhappiness is on the rise, with women more likely to report severe issues at every age, the Health Survey for England found. Every age. Yep. Not just older women, not just younger women, but women at every age. Twenty eight percent of women aged 16-24 have mental health problems bad enough to count as a disorder, reports the Times. This is almost twice as many as men in the same age bracket, the survey of 8,000 people found.

Read that again. 28% of younger women in the UK are literally mentally ill. And that’s double the amount of men the same age. I’m quite sure you’d see comparable numbers in the USA and Canada as well. (If anything, the American figures would likely be worse.) Older women aren’t doing any better: As they enter middle age, 24 per cent of women - almost a quarter of 45 to 54-year-olds - are classifiable as mentally ill.

Yep, though I would like to see the stats on women in their 30’s. As I’ve said many times, the 30’s is the most unhappy decade for women. I’m confident if they did a study on women’s level of unhappiness and broke it out by decade, all decades would be unhappy, but 20’s would be the least unhappy and 30’s would be the most miserable. The traditional, conservative, manosphere response to this is, “Rrraahh!!! This is all because of feminism!!! Before feminism, back in the 1950’s, women were happy! We just need to go back to that and then everything will be fine!!!”

It’s quite true that there is empirical data that shows women were less unhappy in the 1950’s and prior, before feminism. However, conservatives often mix the word “happy” with “less unhappy.” Those are two different things. Based on the data I’ve read, I don’t see any indication that women were “happy” in the 1950’s as housewife-slaves. Yes, they were less unhappy than they are now in our new left-wing, empowered-woman, single-mother, welfare-state world, that’s very true. But less unhappy doesn’t mean happy. It just means less miserable. I’m quite confident married women in the 1950’s weren’t “happy” either.

Let’s see if the science agrees with me. To quote again from the study in the article: married women are often more likely to develop depression HA HA! Exactly. No, my conservative right-wing traditionalist friends, traditional marriage doesn't make women happy. It might make you happy, but it won't make her happy.

What have I been saying for almost ten years? Women love getting married, women hate being married. Getting married is the greatest day of a woman’s life, literally. Being married (particularly the traditional monogamous type), once the honeymoon period dies down, is a long, boring slog of work and massive sacrifice. Women HATE being married.

Women initiate 70-80% of divorces, folks. Clearly women don’t like marriage, and clearly marriage doesn’t make women happy. Because women don’t want to be happy. And that's my entire point. There is no “answer” to this, at least not on any global and societal level. Women don’t want to be long-term happy. It’s just not how they’re wired. It’s no one’s fault, it’s just the way it is. It’s true that you can organize society in a way that makes this slightly less bad, but you'll never make women happy, for example… In total, almost one in five adults were found to have a mental illness, up by 25 per cent in the past four years.

Yep. The Western world is collapsing, and this is yet another sign. Since 2012, I’ve been saying that European and American voters have literally lost their minds, and the science now shows this. Almost one in five adults are mentally ill, and gentlemen, these people are voting in your elections and reproducing. Even if you ended all immigration tomorrow (which won’t happen), this all spells collapse for the West, as I’ve been saying for a long time. Ten years from now, there will be even more mentally ill people in the West. And ten years after that. And after that. Women in the West will grow even more unhappy and men will have to deal with it…

Want over 35 hours of how-to podcasts on how to improve your woman life and financial life? Want to be able to coach with me twice a month? Want access to hours of technique-based video and audio? The SMIC Program is a monthly podcast and coaching program where you get access to massive amounts of exclusive, members-only Alpha 2.0 content as soon as you sign up, and you can cancel whenever you want. Click here for the details.
[vc_row_inner][vc_column_inner][vc_raw_html] JTNDYSUyMHRhcmdldCUzRCUyMl9ibGFuayUyMiUyMGhyZWYlM0QlMjJodHRwcyUzQSUyRiUyRmFscGhhbWFsZTIwLmthcnRyYS5jb20lMkZwYWdlJTJGcFU1ODMlMjIlM0UlMEElM0NpbWclMjBzcmMlM0QlMjIlMjBodHRwcyUzQSUyRiUyRmNhbGViam9uZXNibG9nLmNvbSUyRndwLWNvbnRlbnQlMkZ1cGxvYWRzJTJGMjAyMCUyRjA4JTJGVFVNLTcyOFg5MC0xLnBuZyUyMCUyMiUzRSUzQyUyRmElM0UlMEE=[/vc_raw_html][/vc_column_inner][/vc_row_inner]
This article was originally published on January 11, 2018