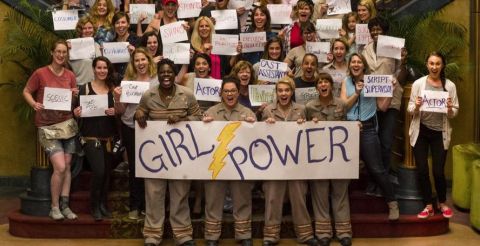 Feminism seems to strike fear, or at least strong anger, into the hearts of many men online. I’ve always found this amusing, since what we call “feminism” today is tiny group of oddball extremists that no one likes and who have no power over greater society.

Of course, left-wing progressivism is a problem, a big one. One that has already won. But that's not feminism. I will discuss this more as we go along.

Feminism doesn’t make me angry. It makes me laugh. Here’s why:

1. Feminism has a bad reputation among typical citizens and most women dislike it.

One thing that is very clear whenever I talk to women in the real world or watch women in most news videos is that the majority of women are turned off by feminism. I am repeatedly hearing from women about how feminism has a bad reputation and how feminists are “just angry” and/or “don’t make any sense.”

There seems to be a fear among men that feminism is this vast army, constantly recruiting hordes of angry women to their cause. The reality seems to be the opposite. I have no numbers to back this up, but I would bet real money that the number of women who are not college students and who call themselves “feminists” has probably declined in the last 15 years, and that the perception of feminism among everyday women has worsened, not improved.

I’m quite convinced that when people see an angry, purple-haired feminist screaming at the camera about male oppression, most women are turned off by it just as much as us guys.

Here’s a quote[*] from a left-wing, politically correct, female YouTube movie critic Grace Randolph that sums up women’s opinion of feminism. Don’t forget, this is a very left-wing woman saying these words:

If the goal of feminism is to recruit more female members (outside of young and moronic college students who will quickly snap out of it once they enter the real world), then feminism clearly gets an F. It’s pretty hard for me to take this group seriously.

A few recent pop culture nerd facts that you can quickly Google to confirm:

3. DC’s Supergirl TV series, loaded with feminist overtones, was just moved from CBS at $3 million per episode to the much smaller CW network at $1 million per episode, a place focusing on male-centric superhero TV shows (like Arrow and The Flash) that are very profitable.

4. Comic books and TV shows that only feature teams of superwomen, such as Birds of Prey, Gotham City Sirens, and X-Men 2013 always fail. Always. They get a few issues or episodes in, and are always canceled due to lack of sales.

At least in the movie / comic book zone, focusing on feministy girl power seems to be a reliable way to lose money and piss people off. Audiences, women included, don’t like it when the girl power message is overt.

Now don’t get me wrong. As I've explained many times on all of my blogs, we live in a left-wing world now, and this left-wing BS is increasing. So women do respond to pro-woman portrayals. It's just that they like it when it’s subtle and not overt. Examples would be the movie Frozen, the perfect Mary Sue character in the last Star Wars movie or the Charlize Theron character in Max Max Fury Road. But this is more because of the encroaching left-liberal transformation among all of Western culture, not because of feminism. Feminism specifically has nothing to do with it. (Again, I’ll discuss that more in a minute.)

3. Most of the big feminist arguments are obviously silly, even to women.

Women may be irrational, but they aren’t stupid. When feminists scream their heads off about how all these men are raping and oppressing women all over the place, normal women look around and don’t see any of this. Instead, they see the same things you and I see. Things like men getting needy and oneitis for their girlfriends, wives bossing their husbands around, men getting financially raped in divorces even if they didn’t do anything horribly wrong, young women making as much or more money than young men, women getting abortions whenever they want, single women having babies whenever they want and getting enthusiastically supported when they do so, and so on.

The feminist psycho-rhetoric doesn’t match what women see at all. This is one of the biggest reasons why most women roll their eyes at angry, ranting feminists.

Amazingly, women are even starting to admit that the 77 cents for every dollar thing is bullshit, which of course it is.

Women will never rule the world. I’ve been saying this for 20 years, long before there was a manosphere or anything like it.

Do you know why I’ve always thought that? It’s simple; because women hate women.

When a group of men focus on a task, usually, not always but usually, they buckle down and get it done. Even if some of the men don’t like each other, they put their feelings aside long enough to accomplish the task at hand.

Does this happen when a group of women get together to get something done? Ah, see that smile on your face? You already know the answer to that, don’t you? Of course you do.

When a group of women try to focus on a task, a few of the women are focused, but several of them always get catty, snotty, and bitchy towards the other women in the group. Drama ensues, continues to get worse, sucks the other women into the arguments, and before long you have a completely dysfunctional group. The task either doesn’t get done, or gets done poorly or behind schedule.

Over the course of my 25-year business career, working in literally hundreds of companies, I’ve seen this happen many times. It doesn’t happen every time, but it happens enough that whenever I see a group in a company compromised of 100% women who actually get shit done well and on time, I’m actually surprised. This isn't because women are less capable than men; it's because generally speaking,

2. Men and women work well together.

(And yes, you nitpickers, there are always unusual exceptions to all of the above.)

Even women know this, which is why most women prefer a male boss. How the hell can feminism be winning if this is the case?

Trust me, you guys who are terrified that women will eventually take over the planet and enslave all of us guys have nothing to worry about. Even if women did take over the Earth (never gonna happen) within a matter of minutes those women would immediately start backstabbing each other, shit would fall apart, us men would clean up the mess, and we’d be in charge again. Don’t worry about it.

Now I can see some of you angry men's rights types about to explode, so let me say one more thing about this just to be clear...

The Western World Is Moving Inexorably to the Left, but It’s Not Because of Feminism

Most guys upset about feminism point to all the crazy, left-wing crap going down in the last few years. Well, yes. As I have described in great detail here and at the CJ Blog, the entire Western world is moving from the right to the left as it descends into slow collapse. But this isn’t because of feminism. Feminism is one of the many symptoms of this, not the cause.

This Western move to things like socialism, massive debt, political correctness, mass immigration, and a greatly expanded welfare state is part of a huge cultural shift that’s been grinding on for several decades now. A few chubby feminists on YouTube didn't do this. Society as a whole did this, including men. Leftists are not just women. Hardcore leftists, at least in the US, are made of at least 48% of men. (I shudder to think what that percentage is in Europe.)

This isn’t a feminism thing. This is a left-wing thing. It’s the inevitable societal shift all great civilizations have suffered, from freedom and prosperity to socialism and chaos, with collapse coming shortly after. Historically, it happens all the time. And it's happening again (sadly).

When the shit finally hits the fan around here, and it will, it will be because of left-wing progressivism (and right-wing neoconservatism and authoritarianism) as a whole, not because of a few feminists with stupid haircuts ranting on Tumblr. No one takes those people seriously.

This article was originally published on June 9, 2016

« 5 Ways to Optimize Your Workspace for Maximum Productivity

Got a New House »