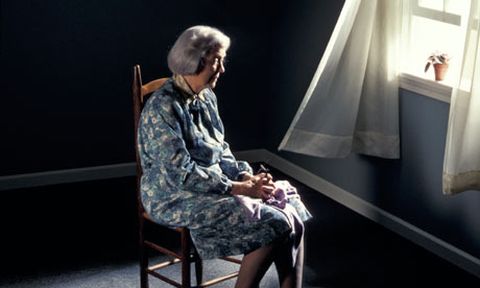 Caleb, years ago I retired as a commercial pilot and got, what was then, a very good retirement package. One of the best you could possibly get, in fact. Just one problem. That was 25 years ago... and I’m still alive.

~One of my business clients
There’s an old lady I know whom I’ll call Mildred. She is one of the few “success stories” (notice the quotes) I can relate to you about what happens when modern-day, long-term, traditional marriage/monogamy actually “succeeds” and/or “works.” She was married to her husband, never got divorced, and to my knowledge, neither of them ever cheated. Sounds like a success story!
But was it?

As I described here, the condition of traditional marriage “success” is rarely what people think it is. I’m going to give you yet another example of how “successful” traditional marriage actually works today, in the modern era of the 21st century.
Like pretty much all the women of her generation, Mildred married her sweetheart back in the late 1930s, while in her late teens. Her new husband was a good, honest, god-fearing, hardworking man I’ll call Joe. Joe went to work, Mildred starting having kids. Joe was lucky enough to avoid serving in both World War II and the Korean War (though I’m not sure how; possibly because he had too many children). He continued to work very hard for many decades, supporting his wife and kids.

Since they both grew up during the Great Depression, Joe and Mildred were fiscally conservative. They pinched pennies in order to raise their kids, and always made sure to save and invest money every month in order to take care of themselves during retirement.

They never even considered getting divorced. Their beliefs, culture, and strong Christian religion all forbade it. In their time, marriage was forever, for better or for worse. (Today we forget that “for worse” part. Do you really want to stay married for decades if your marriage sucks?) They stayed married, raised children, and as far as I know, never cheated on each other (though one never knows for sure). They had, by all societal standards, a 100% successful, traditional marriage.
Everything was great... until Joe grew old and died.
Per the statistics, men die much sooner than women, and Joe and Mildred were no different. In his 60s, Joe passed away due to cancer. Joe was a good man, and everyone was sad.

Fortunately, Joe had put away enough money that Mildred was financially set for life, so at least she didn’t have to worry about money. Yet. Mildred, having been married since her high school years, was now alone and single, literally for the first time in her entire life. She had no idea what to do. Living a life on her own was completely alien to her. Joe was her rock, her backbone, her support, her life. Now he was gone. Mildred grieved for Joe for years. Eventually, she picked herself back up and “got back out there.” First, she tried square dancing. She did this for about two or three years, got bored, and stopped.

Then, she became a secretary, just to fill her time and have something to do. She did this for about two or three years, got bored, and quit. Then, she became a real estate agent. She got her license, sold a few houses, got bored, and quit a few years later. For years and years she aimlessly wandered from activity to activity, never really knowing what to do with her life. When she was married to Joe, it was all so simple; she never had to worry about anything. Now that he was gone, her direction was gone as well. She never really dated. No man could ever compare to Joe. She stayed alone, not quite unhappy, but not happy either.

She had absolutely no personal finance skills, and why would she? Joe always took care of that. As a result, without Joe there to keep the finances organized, she didn’t control her spending. For a few years she was fine, living on the interest of her investments. However, soon she started digging into the principal. Every year, her investment amount became lower and lower.

Eventually, she got so lonely that she couldn't stand it, and she started dating again. She dated an auto mechanic for a while, but then decided she didn’t like him. She later dated a retired teacher, but decided she didn’t like him either. Still later, she dated a nice old man named Dan. She wanted to marry him. He said no, because, now almost in his 70s, he felt he was too old for that.

For Mildred, it was marriage or nothing! After all, marriage was all she knew. So she dumped him and started dating a new guy she met via a very expensive dating service, paid for by once again by digging into her investment principal. (This was before internet dating).

Dan, like most men over age 60, was a low-testosterone beta male, and was distraught when Mildred broke up with him. Full of oneitis, he went to her, hat in hand, tears in his eyes, and proposed. Mildred of course said yes, dropped her current guy like a hot potato, and a few months later, Dan and Mildred were married. They were moderately happy. Mildred finally felt a little more "normal" again. However, they bickered often and had a decent amount of drama as soon as they moved in with each other. In her quiet moments with her close friends or family, she would mention that she still missed Joe, and still wanted to be with Joe. Dan seemed like a placeholder (and probably was).

Very soon, Dan and Mildred ran out of money. Dan never had much to begin with, living mostly on his meager social security. Mildred, not knowing how to handle money, had finally spent every dime that Joe had diligently saved for her throughout his life, money that would have lasted Mildred the rest of her life had she just spent the interest (or if she had died sooner like Joe, since neither Joe nor Mildred ever thought she would live this long).

They had serious financial problems. Just imagine having serious financial problems while in your 80s. It was very hard for both of them. Around this time, luckily, and I mean that; due to pure luck, one of Mildred’s sons struck it rich in the engineering business. He had enough money to support Mildred and Dan, and did so. Now both of them being 100% financially reliant on her son, Mildred was relieved, and went back to her aimless, misdirected life. As time went by, Mildred and Dan’s marriage grew worse and worse. Ever getting older, their health also deteriorated. Soon, their grown children separated them, and placed them each in separate elder care facilities.

Today, Mildred is in her late 90s. It’s been over 30 years since Joe died. She lives in an old folk’s home, alone, and has lost most of her memory. She doesn’t even remember Dan. But she still remembers Joe, still talks about him, still misses him, and still remembers with tears in her eyes how wonderful her life was... 30 years ago. People forget, or don’t realize, that marriage was invented when most human beings died between age 30 and 55. For most of human history, all the way into the 19th century, average life expectancy was age 30. To be fair, in many cases, this number is artificially low due to high infant mortality, but people still didn't live very long. As just one example, in 1880 only 3% of the population of the US was over age 65. Today that number is 13% and growing fast.

Lifetime marriage makes perfect sense for people who die much sooner. But today... Well, today things are very different. The average lifespan now is 79 years, which means 50% of us live longer than 79 years.  Moreover, this number gets higher and higher every year; average lifespan will reach far beyond 100 in our lifetimes. And we still haven’t updated our behaviors or expectations regarding "lifetime" marriage or pair-bonding to reflect it. People in their 40s, 30s, and even 20s still get traditionally and monogamously married under the expectation that it will be "the rest of their life," and plan on this legally, financially, logistically and emotionally.

We will all keep paying the price until society updates the concept of marriage to a new model that reflects new realities.
Want over 35 hours of how-to podcasts on how to improve your woman life and financial life? Want to be able to coach with me twice a month? Want access to hours of technique-based video and audio? The SMIC Program is a monthly podcast and coaching program where you get access to massive amounts of exclusive, members-only Alpha 2.0 content as soon as you sign up, and you can cancel whenever you want. Click here for the details.
[vc_row_inner][vc_column_inner][vc_raw_html] JTNDYSUyMHRhcmdldCUzRCUyMl9ibGFuayUyMiUyMGhyZWYlM0QlMjJodHRwcyUzQSUyRiUyRmFscGhhbWFsZTIwLmthcnRyYS5jb20lMkZwYWdlJTJGcFU1ODMlMjIlM0UlMEElM0NpbWclMjBzcmMlM0QlMjIlMjBodHRwcyUzQSUyRiUyRmNhbGViam9uZXNibG9nLmNvbSUyRndwLWNvbnRlbnQlMkZ1cGxvYWRzJTJGMjAyMCUyRjA4JTJGVFVNLTcyOFg5MC0xLnBuZyUyMCUyMiUzRSUzQyUyRmElM0UlMEE=[/vc_raw_html][/vc_column_inner][/vc_row_inner]
This article was originally published on January 12, 2017