Worrying Too Much About STD’s 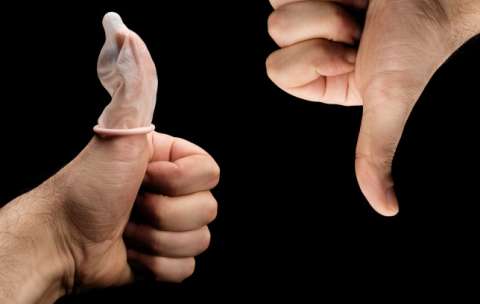 Worrying Too Much About STD’s

There is a percentage of men in the dating world who are so overcome with irrational fears about sexually transmitted diseases that it causes a lot of trouble for them, and not only with women and dating, but with other areas of their lives. Over the last several years I’ve coached and received emails from men who have remained virgins in their late 20’s to mid 30’s. When I ask them why they stayed virgins so long, the most common answer I get is that they’re terrified of getting an STD.Other men don’t take it to this extreme, but spend a lot of time and effort worrying about this. This is an email I received a while back (just one of many about this) that is a perfect example of the mindset I’m talking about:

I read your blog regularly and bought your books. You reiterate the importance of safe sex but do not cover it enough beyond condoms. Condoms are often inadequate against STDs like herpes, HPV, etc. and most people do oral sex raw. Please do an article promoting adequate protection. There are millions of men who are consumed with stressing about getting STD’s, about condoms not working, about getting an STD from oral sex, and other extremely unlikely events. If you are one of these men, today I’m going to do my best to allay your fears, most of which aren’t based on anything factual. The 2% Rule

Before getting into the specifics, I need to reiterate the 2% Rule. I describe it in detail here, but the summary of the 2% Rule is this: If a particular negative result has a less than 2% chance of occurring, don’t worry about it. Don’t even think about it. Proceed. If something bad has a less than 2% chance of actually happening to you, don’t fucking worry about it. If you do, you will literally become an insane person. You won’t ever get a car because you might die in a car accident. You’ll never walk down the street in your local city because you might get shot. You’ll never go on a date with a girl because she might whip out a pistol and shoot you in the head. And of course, you won’t ever have sex because you might get a STD.

STOP IT with this silly, insane bullshit. If something seriously bad has a 10% or 25% chance of happening, then yes, you need to stop and address it. Either refrain from taking action, or modify that action to get the odds of something negative occurring way down to 2%, or at least as close to 2% as you can. This is why I warn men against getting traditionally, monogamously married. The odds of failure of that in the Western world and in the modern era are a whopping 87%, so clearly you shouldn’t do this. But if the failure rate of forever-happy traditional, monogamous marriage was just 2%, I’d have no problem with it. So if the odds of something are 2% or less, for fuck’s sake, stop being a pussy and proceed. You’ll be just fine, I promise. Now let’s get to discussing the actual, real-life risk of getting STD’s.

1. First, I’ll use me as an example. I have had sex with a huge number of women. I’m not going to give you the exact number (I don’t even know it off the top of my head; I’d have to look it up in my spreadsheets), but it’s a number that is many, many times the average number of women the typical man will ever have sex with in his entire lifetime. And my last STD test just came back as clean. So there you go. If you’re terrified of having sex because you think you might get an STD, I just showed you that you are wrong (unless you think I’m lying, of course). I’ve had sex with mountains of women, and I’m STD-free.

2. Now I’ll address other men I’ve known in the pick-up artist world. I personally know many men who have had sex with over 100 women who today are STD free. I also know two guys who have had sex with over 100 women and almost never used condoms. They just barebacked scores of women. They’re idiots (and they admit this) but these guys have both reported to me that they did get chlamydia once or twice, but that’s it. Chlamydia, if you didn’t already know, usually has no symptoms and is easily and quickly cured by taking an antibiotic for a about a week. So again, there you go. I know way too many men who have had sex with lots of girls who either never got an STD or just got something easily fixable like chlamydia.

3. Now let’s talk about what doctors say about this. Whenever I go to a doctor, I ask a lot of questions about sexual health because I write about this stuff and want as much data as I can amass.When talking about the risk of getting HIV/AIDS, one doctor told me that the actual risk of getting HIV for an American living in America is infinitesimal unless you’re a drug user. He flat-out told me that I could have unprotected sex (no condom!) with over 200 women in my local area and I would still not get HIV. He warned that I might get other minor stuff (again, like Chlamydia), but not HIV. He said people are way too freaked out about this. He’s right.
[vc_row_inner][vc_column_inner][vc_raw_html] JTNDYSUyMHRhcmdldCUzRCUyMl9ibGFuayUyMiUyMGhyZWYlM0QlMjJodHRwJTNBJTJGJTJGd3d3LmdldHRvc2V4ZmFzdC5jb20lMjIlM0UlMEElM0NpbWclMjBzcmMlM0QlMjJodHRwcyUzQSUyRiUyRmJsYWNrZHJhZ29uYmxvZy5jb20lMkZ3cC1jb250ZW50JTJGdXBsb2FkcyUyRjIwMjAlMkYwMiUyRkdTRl83MjhYOTAucG5nJTIyJTNFJTNDJTJGYSUzRSUwQQ==[/vc_raw_html][/vc_column_inner][/vc_row_inner]
4. Now let’s look at the stats. According to the CDC, the greatest repository of medical data in the entire world, condoms, if used correctly, have a 98% success rate. That’s a 2% failure rate, which is right in line with the 2% Rule. That means that if you use condoms, then congratulations, you never need to worry about STD’s via vaginal or anal sex. It’s within the 2% Rule, so don’t worry and just proceed.

If you are terrified that you might be using condoms incorrectly, you can go to this page and see the most common mistakes men make with condoms. I have a feeling you’re using them correctly though; they really aren’t that complicated.

Everything above applies to not just HIV/AIDS, but every other fluid-transfer STD, such as chlamydia, gonorrhea, syphilis, and so on. In the Ultimate Open Relationships Manual, I have an entire chapter on STD’s where I analyze each one in great detail, including your risks and how to avoid them.For you nitpickers and math nerds, mathematically speaking it's true that if you have repeated sex with a particular infected woman over and over again, these odds compound, raising it to beyond numbers like 0.08%. But that's exactly my point. The way most men get STD's is repeatedly fucking an infected woman with no condom, over and over again, over a long period of time. The odds of actually getting a STD from having sex with a particular woman just one time, two times, or even five times are extremely low, even if you don't use a condom (which of course you should).

This happened to me. I've mentioned before that I got chlamydia almost ten years go, back when I was still inexperienced with the Alpha Male lifestyle and didn't yet know what I was doing. I had it for two weeks, took a pill, and it was gone. Did I get it from some one night stand, or some FB I saw once or twice a month? Nope, I got it by repeatedly having unprotected sex with a particular risky woman, usually several times a week, for about four months straight. Then I got it. (This was before I developed my once-a-week rule.) In other words, often men have to be really irresponsible to get a STD, like I was back then.
[vc_row_inner][vc_column_inner][vc_raw_html] JTNDYSUyMHRhcmdldCUzRCUyMl9ibGFuayUyMiUyMGhyZWYlM0QlMjJodHRwJTNBJTJGJTJGd3d3LmhhdmVvcGVucmVsYXRpb25zaGlwcy5jb20lMjIlM0UlMEElM0NpbWclMjBzcmMlM0QlMjJodHRwcyUzQSUyRiUyRmJsYWNrZHJhZ29uYmxvZy5jb20lMkZ3cC1jb250ZW50JTJGdXBsb2FkcyUyRjIwMjAlMkYwMiUyRk9STS03MjhYOTAucG5nJTIyJTNFJTNDJTJGYSUzRSUwQQ==[/vc_raw_html][/vc_column_inner][/vc_row_inner]
6. If you’re circumcised, congratulations, your odds of getting an STD immediately go down by a whopping 60%. (I’m personally against the concept of circumcising babies, but that’s a topic for another time. The facts are that you’re far less likely to get a STD if you’re circumcised).

7. “Yeah, well, that’s AIDS, but your odds of getting herpes is way worse BD! That’s just skin-to-skin contact, so you can get it even if you’re wearing a condom!!!” First of all, there are two kinds of herpes, and these two often get mixed up. There’s herpes one (HSV-1) and herpes two (HSV-2).

If you’ve made out with more than about six women in your entire lifetime (not had sex, just kissed them on the mouth), then congratulations, you already have herpes one. “WHAT?!?” Yep, you do. I’m sure I have it. I can’t not have it. You probably have it too, and it doesn’t fucking matter. You can get herpes one just by kissing someone, and since around 80% of Americans already have it (source), you probably already have it too. Most people who have it have no symptoms. At worse, you might get a tiny cold sore in or around your mouth. That’s it. So shut up about herpes one. You’ve probably already got it.

The one everyone is scared about is herpes two, where you can get painful sores on your genitals every once in a while. Again, using CDC figures, your odds of getting herpes two from oral sex (giving or receiving) is far less than 1%. If you’re having unprotected vaginal sex (no condom!) as a man, you have only a 4% chance of getting herpes two from an infected woman during an entire year of having regular sex with her. This assumes that you don’t have sex with her while she’s having a breakout (i.e. she’s experiencing those ugly sores on her pussy), but I don’t think you’ll put your penis inside a woman who’s vagina is covered in sores. Right?

(For nitpickers: Yes, it's technically possible to get herpes two from a woman who is showing no symptoms when she is in her "shedding" phase, but the odds of this actually occurring is well within the 2% Rule, so shut up.) If she’s on some kind of suppression therapy (many people with herpes two are), the 4% risk drops down to 1-2%. Using condoms drops this even further. And now, once again, we are at the 2% Rule. So don’t worry about it. I personally know married couples who have been married 12 and 15 years where one person has herpes and the other person still doesn't, even after over a decade of marriage and having kids. (Granted, they're probably not having very much sex with each other if they've been monogamously married for 10+ years, but you get my point.)

So there you have it. I just gave you a pile of both anecdotal and statistical information about all of this. Don’t be a paranoid spazoid about this stuff. Wear condoms when you have sex with new women, and then have all the sex you want with no fear or guilt. You’re well within the 2% Rule at that point, which means you need to just relax, stop making excuses, and go get laid. You’re welcome.

Want over 35 hours of how-to podcasts on how to improve your woman life and financial life? Want to be able to coach with me twice a month? Want access to hours of technique-based video and audio? The SMIC Program is a monthly podcast and coaching program where you get access to massive amounts of exclusive, members-only Alpha 2.0 content as soon as you sign up, and you can cancel whenever you want. Click here for the details.
This article was originally published on January 25, 2018