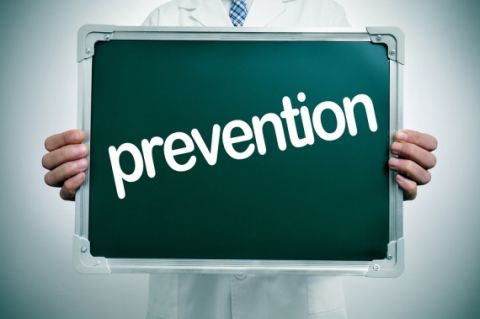 I cover all the core techniques on how to prevent STDs in great detail in my ebooks, but today, I’m going to give you a few additional side tips on how to reduce the odds of getting something nasty.

Important note: None of these things will actually prevent you from getting an STD. All they’ll do is slightly reduce your odds of getting one over time. The more things you do to reduce your odds, the better, but please don’t think that showering after sex will protect you from contracting gonorrhea for example. It won’t.

My qualifications in giving this advice. For the past eight years, I have been completely non-monogamous and I am always having sex with multiple women on a regular basis. My last STD test just came back clean, as it always does. I get tested about 3 times a year for every STD known to man.

I’m very careful. As I’ve said many times, responsibility and adult behavior do work. STD risk should never be an excuse to go monogamous.

Once, about seven years ago (2008ish I think), when I was new to this lifestyle and less careful than I am now, I had chlamydia for exactly two weeks. Thankfully, there’s a cure for that one. As soon as I found out my partner had chlamydia, I got tested, took a pill for about 10 days, got tested again, and it was all gone. Other than that one incident, I have been 100% STD-free for my entire life despite my high level of sexual activity with multiple people over an extremely prolonged period of time.

Granted, I don’t do one night stands and my lifetime partner count is not quite as high as a hardcore Thrill of the Hunt player or PUA. A high notch count has never been my objective. I actually think that’s an immature and useless goal to have, but that’s just my opinion. Rather, my goal, that I already hit many years ago, was to have sex available to me at a moment’s notice, whenever I want, without having to promise monogamy to anyone.

This means I have a few non-monogamous relationships going at all times. So while I have a lot of sex, I don’t necessarily have sex with a lot of people. While my partner count is very high compared to an average man or even the typical sexually experienced man, these days I don’t do any sarging or new dating until once in every 18 months or so. I don’t need to. I’m always seeing 2-4 MLTRs and/or FBs. This means that these days, over the course of 18 months, I might have sex with only 4-8 women, unlike the player or PUA who will have 20 or 40 partners.

What a great segue! This leads me to my first tip:

I realize that if you’re a Thrill of the Hunt guy, you’re going to get bored with your women much faster than a Pleasure of Sex man like myself. I understand. Regardless, I think you should have sex with the minimum number of women to satisfy your sexual and variety needs. If you really, really need to have sex with ten new women this year, then okay, go for it. However, given that ten-women desire, having sex with 30 new women this year just to brag on a forum or to beat your chest is kinda dumb. See my point?

The corollary to this is to do your best, as much as your personality allows, to focus on recurring relationships rather than new women.

Longtime readers know that whenever my number of recurring women drops down to two, I don’t suddenly go out and meet new women. Instead, I hit up all the women I’ve already had sex with, and try to bring them back into the fold first. Often this is all I need to do, particularly because I have a 94% return rate for women who leave me or LSNFTE me.

If I can’t get any women back, then, and only then, do I reluctantly take some time away from my Mission, hit up the dating sites, and get some new ones. The point is that my focus is always on recurring women, not new women.

Can you still get an STD from a recurring woman, or a woman you haven’t seeing a while? Of course you can, but your odds are still lower, because these women are known quantities. Compare that to how well you know a woman when you have sex with her on the second date.

2. Urinate right before sex, and right after.

Urinating right before and right after sex has been shown to slightly reduce STD risk. More importantly, it reduces the odds of you getting a UTI (urinary tract infection) or other bacterial infection inside your Johnson, balls, or bladder. Yikes. I’ve had one of those before. It was not fun, and you don’t want one.

3. Shower and wash your genitals right after sex.

This will slightly reduce (but not prevent) STD risk.

I started getting into the habit of always taking a quick, soapy shower right after sex about three years ago. Prior to that, I would only do this if I knew I was seeing another woman that day (since I shower every morning regardless). These days, I take very quick, very soapy shower right after sex, 100% of the time, no exceptions, no matter who it is or how late in the evening it is. Not only it is safer, but it just feels cleaner.

There are two completely different types of STDs. One type infects you by being transferred from her vaginal fluids into your dickhole. This includes chlamydia, gonorrhea, HIV, and syphilis. Hepatitis B and C can also be transferred this way, but only if her blood gets into you (like during her period); her other fluids are safe. Fortunately there’s a vaccine for hepatitis B (that you should get) and they’ve just invented a cure for hepatitis C, as I reported last year.

Using a condom (correctly) will prevent these STDs (other than syphilis, which can be also transferred via kissing) because your dickhole remains completely covered and dry during sex.

The second form of STD has nothing to do with your dickhole or fluids. Instead, it is transferred by skin touching other skin, even if you’re wearing a condom. This includes herpes and HPV. If you wear a condom, your odds of getting a skin-to-skin transfer STD are vastly reduced, because the skin on your cock is covered. However, it’s not 100% protected, because you’re touching a lot of her skin down there during sex even with the condom.

It’s important that you understand the difference between these two types. For example, if a woman has chlamydia, if you wear a good condom and use it correctly, you’re completely protected. If a woman has genital herpes and she’s shedding or having a breakout, that condom isn’t going to help you much unless 100% of her infection is inside her vagina (which isn’t likely).

Being the classy and distinguished gentleman that I am (ahem), I always give a woman a fresh towel after sex. When you do this, don’t use the same towel to then towel off yourself. Sometimes this can be difficult, especially if logistics are odd and/or if you’re still in a post-orgasm daze and not thinking clearly. Regardless, keeping towels separate will lower STD risk a little.

7. Pause every few minutes during sex and check that god damn condom.

I’ve said this many times, here and in my books, but I’m going to repeat it anyway since it’s so important and since very few men actually do it.

You cannot put on a condom, enter her Golden Gully, and just start pumping away. Condoms are not a set-it-and-forget-it system. You must have the presence of mind to stop and check that thing every few minutes. This is especially important when having sex with a new woman or if the woman is particularly tight.

Condoms slip. Condoms ride up the shaft. Condoms come off. Condoms break. Condoms crack. This stuff happens, and happens a lot. It won’t happen to you if you’re regularly checking the damn thing.

8. Long-term partners should be taking regular blood tests and you should be seeing the results.

This is open/poly 101 stuff. If you want to take that condom off with someone special who has demonstrated a long track record of responsible behavior, then go ahead. However, her ass better be in the lab once or twice a year getting her blood drawn, just like you have been doing. Then you need to see the original STD test results (not a copy). This means the original email or the original paperwork from the doctor.

If she refuses, then keep the condom on and/or downgrade her, and go find someone else more responsible.

This article was originally published on June 22, 2015

Donald Trump For President!!! (But Not Really) »